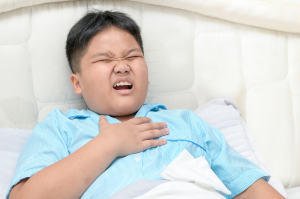 Chest pains in children are normally not related
to the heart, creating the potential for
unnecessary referrals to cardiac specialists
Unnecessary referrals do not just rack up costs and time spent in the doctor’s office. They add to the already long list of tasks and patients that physicians must see to, and delay timely access to diagnoses and treatment plans for patients in more immediate need.

Take children with chest pains for instance. When many complain of experiencing this discomfort, standard practice is for primary care pediatricians to refer them to a cardiac specialist. In reality, the pain most of the time is not related to the heart.

Such predicaments have led to proposals for reforms and a number of solutions for rooting out who truly requires referrals. A recent one is a decision support and quality improvement tool that identifies the expertise of providers and information from EHRs as an evidence-based approach to identify red flags that indicate if the heart is the source of chest pains. Its creators at Children’s National Hospital profess that it could save a minimum of $3.8 million annually in healthcare spending.

"We know that evidence-based tools can be very effective in guiding physician behavior and reducing unnecessary testing and referrals, which saves both the health care system in dollars and families in time and anxiety," Dr. Ashraf Harahsheh, pediatric and preventive cardiologist and director of resident education in cardiology at Children's National Hospital, said in a statement.

More than 620,000 office-based visits to pediatricians in 2012 were for chest pains, according to a 2017 multi-institutional study led by Harahsheh. It is the basis for the approach.

Among the red flags the decision support tool assesses is a worrisome family history, which includes sudden unexplained deaths and cardiomyopathy. It also looks at abnormal personal medical histories, which can include symptoms such as chest pain with exertion; exertional syncope; chest pain that radiates to the back, jaw, left arm or left shoulder; chest pain that rises with supine position; and chest pain temporarily associated with a fever above 101.12°F (38.4°C).

Resolving the issue of unnecessary referrals requires more than just the right technology for guidance. For instance, a 2015 study found most emergency room physicians performed unnecessary MR and CT exams, with 97 percent reporting that at least some of the advanced imaging exams they order are medically unnecessary. When the researchers asked participants for recommendations on how to address the issue, 79 percent called for malpractice reform, while 70 percent recommended educating patients to involve them more. Fifty-six percent said shared decision-making was needed; 55 percent wanted feedback on test-ordering metrics; and 50 percent believed better educating physicians on diagnostic testing was key.
1(current)
2