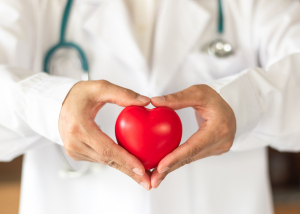 Conducted by researchers at Penn State College of Medicine and Penn State Cancer Institute, and other U.S. colleagues, the study is the largest and most comprehensive to date for assessing CVD deaths among cancer patients, and looked at 28 different types of cancer in cases spanning over 40 years.

“These findings show that a large proportion of certain cancer patients will die of cardiovascular disease, including heart disease, stroke, aneurysm, high blood pressure and damage to blood vessels,” co-author Dr. Kathleen Sturgeon, an assistant professor in public health sciences, said in a statement. “We also found that among survivors with any type of cancer diagnosed before the age of 55, the risk of cardiovascular death was more than tenfold greater than in the general population.

Of all patients, 38 percent died from cancer and 11 percent died from CVDs. Among CVD deaths, 76 percent were due to heart disease, with risk of dying from CVD the highest in the first year after a cancer diagnosis and among patients under 35.

Breast and prostate cancer patients experienced the majority of CVD deaths, due to these being the most common cancers. The highest proportion of cancer survivors dying from CVD had cancer of the bladder (19 percent); larynx (17 percent); prostate (17 percent); womb (16 percent); bowel (14 percent); and breast (12 percent).

Survivors with cancer of the breast, larynx, skin, Hodgkin lymphoma, thyroid, testis, prostate, endometrium, bladder, vulva, and penis, had the same chances of dying of CVDs as they did from their initial cancer. Patients with the most aggressive and difficult to treat cancers, such as lung, liver, brain, stomach, gallbladder, pancreas, ovary, oesophagus and multiple myeloma were more likely to succumb to their cancer.

Radiation oncologist and co-author Nicholas Zaorsky said risk of dying from CVD within the first year of diagnosis might be due to the detection of other illnesses and problems, such as heart disease, lung dysfunction and kidney failure, when a patient first enters a hospital system, or by aggressive treatment they receive for their cancer.

“Clinicians need to be aware that the majority of cardiovascular disease deaths occur in patients diagnosed with breast, prostate or bladder cancer. Thus, clinics that aim to open ‘cardio-oncology’ centres should likely focus on the inclusion of these sites, followed by the other sites listed above,” he said in a statement. “Additionally, primary care physicians and cardiologists may seek to control cardiovascular diseases more aggressively in cancer survivors.”

Study limitations included not knowing what treatments patients underwent and if they were more toxic for the heart; lack of information on other illnesses and risk factors patients may have carried; and the influence of patients’ socioeconomic conditions. Risks may vary in different populations across the U.S. In addition, the authors thought their findings most applicable to Canada, Europe and Australia since, cancers and the causes of death among cancer patients are similar.

The study was published in the European Heart Journal.