Learning from failure — RSNA lessons on informatics in radiology 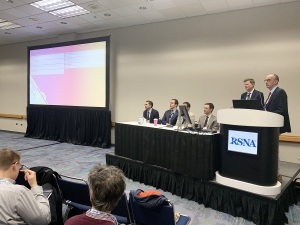 Information experts discuss their past mistakes
to highlight potential issues faced in health
IT and informatics for radiology
Dr. James Whitfill awoke one morning in 2005 to a string of angry emails and voice messages, asking why the PACS system at his place of work was down. Upon investigating the matter, he found that the remote support team of the vendor that installed the solution had initiated an update to the NDCs (table of contents of the PACS system) without notifying the provider. What was thought would take six hours ended up taking 18.

“We were only able to do about 30 percent of the work that came in that day,” said Whitfill, almost 15 years later, to an audience of his peers at the 2019 annual meeting of the Radiological Society of North America, during a session called “Radiology Informatics Mistakes and War Stories from the Physician Front Lines.” “It took several more days. People had to come in on the weekend in order to catch up.”

The support team miscalculated the amount of time it would take to update the system, basing its estimate on previous updates it conducted at more illustrious university sites. The blame, however, does not solely rest with that. Whitfield and his colleagues were aware that the NDCs needed to be updated, having received complaints of slow response speeds within the worklist applications. They were attempting to fix the issue themselves, a fact they did not communicate to the vendor.

In the end, the problem was temporarily remedied with the use of a nominal downtime solution made of open source software and a DICOM router. Whitfill was not sure, though, if the backup would work, as none of the components had been tested.

“We really didn’t have any money for any kind of backup solutions or downtime solutions. We had talked about this and asked ‘What would happen if the PACS system went down?’ We said, ‘Oh, is that really going to happen? Probably not,’" he said to laughter from the audience.

Whitfill, today, is the senior vice president and chief transformation officer at HonorHealth in Arizona. He says that the incident at his previous place of work — which he would not name — has taught him the value of having an efficient backup in place, and communicating with all stakeholders about any issues that arise.

Such values are becoming more and more necessary in the world of informatics, with increasing numbers of providers looking to integrate isolated department silos into top notch enterprise ecosystems. It is vital that radiologists understand the potential mishaps that can occur when installing and using technologies in their work environments, and the impacts they can have, not just on patient safety, care and workflow, but also the well-being of the physician and hospital personnel.

One person who knows this well is Dr. Chris Roth, the vice chairman of radiology, information technology and clinical informatics at Duke University Health System. Back around 2014-2015, Roth gained approval to begin the purchasing process for an image exchange application that he planned to implement throughout all departments at Duke. While built for and proven to be efficient for radiology, the system had not been used or tested in other specialties.

“I didn’t recognize that these other specialties were unique,” he said. “There was a lot of frustration that ensued after that.

Roth was confident the solution would fit in well in other areas of health, with the vendor assuring him that it would and based on its successful use at two other institutions. He was not aware that both used the system very rarely.

Upon running into a number of challenges with the application, the other departments asked that it be tested in a number of use cases outside of radiology. The application “flunked spectacularly” in Roth’s own words. “My brand took a hit, my job description changed after that … my competency was questioned, and my application for years was used with a negative connotation for that, with ‘We don’t want this to turn into another…’”

The failure also extended into Roth’s personal life, with the time he invested in the device eating away at his relationship with his wife and daughter. Though happily married today, he advises professionals to test a product before purchasing it to be sure it meets everyone’s needs, and to not let overambitiousness take away from what matters most, such as quality time with family, friends and loved ones.

“When I come into RSNA, I log in and see amazing research projects, posters, vendors. Everything is really impressive. I get a sense that there is never anything bad except in my place. It’s just not true,” he said. “The people who are standing up in front of you blow it too. We screw up just as much as anybody else. As dysfunctional as you may be, we are dysfunctional too. Our places are dysfunctional. We’re all just trying to do the right thing.”