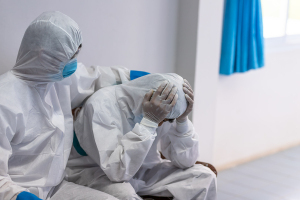 Over 50% of healthcare providers are worried for their own health as they care for COVID-19 patients, with many lacking access to mental health resources and expecting pay cuts.
Fifty-six percent of U.S. healthcare workers are concerned for their own health and safety while tending to patients with COVID-19. Despite this, two-thirds have no access to mental health resources to help manage this anxiety, according to the second Covid-19 Front Line Pulse Check, a special edition of Bain & Company’s sixth annual Front Line of Healthcare report.

Adding further stress is pay cuts, an expectation that 25% of the 300 physicians and nurses surveyed anticipate will take place this month and in the coming months. These worries can potentially pose a number of risks to a clinician’s well-being and stem from a lack of preparedness among providers, says Josh Weisbrod, partner at Bain & Company and head of the firm's Americas Healthcare practice.

"In the much-needed rush to tackle Covid-19 cases, health systems likely didn't have time to set up an ideal infrastructure to support front-line employees,” he told HCB News. “And as much as mental health has emerged as a larger conversation topic in American healthcare, it still doesn't get as much attention as it should. As a result, it fell off the plate as hospitals surged to fight Covid-19.”

Respondents were initially surveyed in March with the first COVID-19 Front Line Pulse Check. The second showed a decline in concern overall for most regions of the country as case loads flatten, with 56% of respondents worried about the state of their health in April, compared to 76% in March. A smaller proportion of clinicians in Los Angeles and Seattle, for instance, reported feeling very concerned, compared to the number who did in March. This, however, was not true for all areas, as clinicians in New York showed no change in their concern for their own health, due to the extreme virus level there.

Sixty-five percent of front-line workers report that they do not have access to additional mental health services to help manage stress and anxiety. Some, however, are seeing this change in specific locations, such as New York, where added mental health resources rose from less than 40 percent in March to 70 percent in April. Los Angeles providers have also seen such resources double and Bostonian providers report a nearly 25 percent increase.

“Hospitals are clearly recognizing that mental health support is needed for their employees and taking appropriate actions,” said Weisbrod. “In the two weeks between our Front Line of Healthcare pulse checks, we saw a significant uptick in providers reporting hospitals had added mental health resources — from 33 percent on March 30 to 45 percent on April 13."
1(current)
2