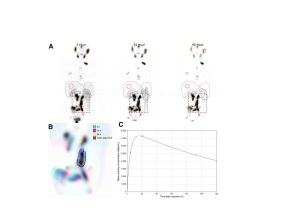 Researchers at the Peter MacCallum Cancer Centre in Melbourne have devised a simplified process in which one follow-up SPECT/CT scan can be used to obtain radiation dose estimates for tumors and at-risk organs.They compiled their findings in a study, Radiation Dosimetry in 177Lu-PSMA-617 Therapy Using a Single Posttreatment SPECT/CT Scan: A Novel Methodology to Generate Time- and Tissue-Specific Dose Factors..

“In most radionuclide therapies, a fixed amount of radionuclide is administered, which does not take into account individual patient variability in tumor and normal tissue uptake, and hence absorbed dose,” said John Violet, BSc, MBBS, MRCP, FRCR, Ph.D., FRANZCR, a radiation oncologist at the Peter MacCallum Cancer Centre, in a statement. “‘Dosimetry-led’ administration, on the other hand, where administered activity is adjusted based upon predictable tumor and normal tissue absorbed doses, has the potential to greatly improve therapeutic outcomes. As dosimetry requires multiple SPECT/CT scans post-therapy, however, it is rarely performed outside clinical trials.”

Violet and his colleagues tested their approach on 29 patients with prostate cancer and used it to assess 177Lu-PSMA-617, a highly active therapy for PSMA-expressing metastatic prostate cancers with no standardization for how treatment should be administered. Patients underwent SPECT/CT imaging at four, 24 and 96 hours to characterize tracer pharmacokinetics in tumors and in normal tissues of interest.

The researchers defined three-dimensional volumes of interest on the first image volume to assess serial measurements and form a method to automatically align each contoured subregion and evaluate pharmacokinetics. The data was used to develop a population PSMA clearance model for tumors and healthy organs. Tumor dose estimates were found to be most accurate using delayed scanning at times beyond 72 hours, and dose to healthy tissue was best defined by scanning patients in the first two days of treatment because of the larger degree of tracer clearance in this early phase.

The study authors say that applying a generic pharmacokinetic model for PSMA retention makes it possible to estimate radiation absorbed dose with a single image measurement. The range of added uncertainty can be appreciated based on the variability in population curves when normalized to the single time point.

Violet says the findings may help improve our understanding of radiation dose response to radionuclide therapy to the point where clinicians can tailor treatments based on an individual’s physiology rather than rely on fixed activity prescriptions. He adds that it could assist in developing radiobiological models specific to Lu-PSMA, and other radionuclide therapies.

“The routine application of radiation dosimetry would be an important step in achieving the goal of ‘dosimetry-led’ treatment, providing significant improvements in both the safety and efficacy of treatment,” he said. “The adoption of routine dosimetry across molecular imaging and nuclear medicine in general would be a major advance in the field for both the clinical application of established therapies and the optimization of novel treatments.”

The findings were published in The Journal of Nuclear Medicine.