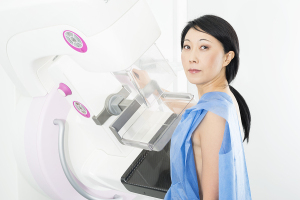 Researchers at Queen Mary University of London saw a 25% decrease in breast cancer mortality among women between 40 and 49 in the first 10 years after they were screened, with minimal increase in overdiagnosis and the reduction in mortality in the long-term translating to about one life saved per thousand women screened. The findings come from a 23-year follow-up to a 1990s study.

"Screening women aged under 50 would increase their lifetime exposure to radiation," Stephen Duffy, professor of cancer screening at Queen Mary University of London, told HCB News. "The dose is low, however, and the attached risks, certainly for women aged 40 or over, would be correspondingly low."

Known as the UK Breast Screening Age Trial, the randomized study included more than 160,000 British women between 1990 and 1997. Each participant was between 39 and 41 when she started the trial and either underwent annual mammography until the age of 48, or usual NHS breast screening which starts at age 50. The trial was conducted in 23 breast screening units in England, Wales, and Scotland.

In addition to a quarter drop in breast cancer mortality over the first 10 years, total years of life saved from breast cancer in the intervention group (annual mammograms) was estimated to be 620. It corresponded to 11.5 years saved per 1,000 women who underwent earlier screening.

A modest overdiagnosis was found in this age group, but any overdiagnosed with cancers would otherwise be diagnosed at NHS screening once they turned 50, according to the researchers, who assert that screening patients between 40 and 49 does not appear to increase overdiagnosed cases from screening at age 50 and over.

Greater research, however, is required, according to Duffy, to assess the impact that advancements in early detection technology and breast cancer treatment might have on screening-related reduction in mortality for women between 40 and 49, as well as the cost-effectiveness of lowering the screening age. Duffy also notes that the main concern at the moment is getting healthcare operations back to normal following the COVID-19 pandemic.

"At the moment in the UK, the priority is to restore the national screening program in women aged 50-70, following the hiatus during the pandemic," he said. "This is a major logistic task and a major call on resources, so it would be difficult if not impossible to expand the target population to include women aged under 50 at the moment. When services have returned so something like routine, it will at least be worth thinking about whether to lower the age limit."

The study was funded by the National Institute for Health Research Health Technology Assessment program, and included researchers from King's College London, University of Nottingham, University of Dundee and Tel Aviv University.

The findings were published in The Lancet Oncology.