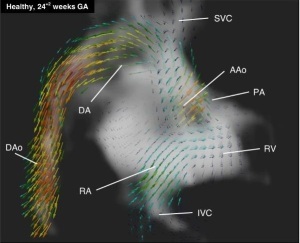 Researchers at King’s College London have found that a combination of MR and mathematical motion-correction techniques and models resolves deficiencies faced with conventional ultrasound when imaging major vessels and blood flow circulation in the hearts of babies inside pregnant mothers. Their approach, they claim, is the first that enables a view of the fetal heart in four dimensions.

"Ultrasound is the primary tool for screening fetuses and diagnosing CHD before birth because it is highly effective for many imaging scenarios and because of its relatively low cost," Dr. Thomas Roberts, fetal MRI research associate of perinatal Imaging & Health at King's College London, told HCB News. "Fetal MR is intended to be a complementary, reliable, secondary imaging method. For instance, double aortic arch can be difficult to visualize before birth with ultrasound, so 3D MR methods can be very informative."

Existing in-utero methods are hindered by fetal motion, which can prevent ultrasound from measuring the blood flow in tiny vessels and make its measurements unreliable. MR measurements of blood flow in adult hearts have easily shown if the heart is beating efficiently or not, or if a vessel may have some abnormal flow of blood.

The images obtained are still 3D but depict changes in the heart over time. Using mathematical motion-correction techniques and models, the researchers stitched together the series of images to create the 4D volumes and show the heart contracting and beating. This, in effect, overcomes the challenges created by fetal motion.

While such imaging is standard for adults, this is the first time it has been made possible for the fetal heart, which beats twice as fast as an adult’s. In addition, while diagnosing congenital heart disease mainly focuses on whether the fetal heart has formed incorrectly, the approach could enable clinicians to evaluate performance of the heart. They could also diagnose a broad range of CHD pathologies, as there are relatively straightforward heart diseases as well as more complicated ones which are difficult to diagnose with ultrasound.

Roberts notes that in being able to more effectively detect CHD prior to birth, doctors and parents can prepare in advance to offer appropriate care to the child that can sometimes be lifesaving.

"We've not been able to image blood flow throughout the entire fetal heart like this before, so there is a lot of potential to make new discoveries about the hemodynamics of the fetal heart, which is very exciting," said Roberts. "Currently, the fetal 4D flow MR method is very new, so it is under active development and refinement. The MR sequence that underpins this method is readily available on most MR scanners and one of our long-term goals is to develop the method so that it works for routine clinical usage."

The findings were published in Nature Communications.