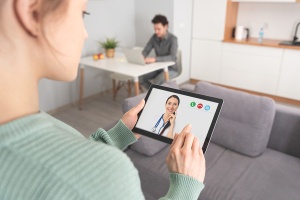 Teladoc has accused Amwell of infringing on a number of patents it obtained in an acquisition it completed in July
Teladoc is taking Amwell to court for patent infringement over the latter’s development of a digital scope, stethoscope and telemedicine carts.

Teladoc, which filed its suit Monday in a Delaware district court, has accused Amwell’s devices of directly and indirectly encroaching on intellectual property it obtained when it acquired a startup called InTouch earlier this year. The complaint is calling for triple damages and court fees to be paid, as well as an injunction against Amwell, according to Healthcare Dive.

“We demand that Amwell immediately cease selling, offering to sell, making, using, and importing into the U.S. the accused products,” said Teladoc in a letter it sent back in September threatening to take legal action against Amwell.

Amwell had denied the claims, believing them to lack merit. It plans to “defend against them vigorously,” a spokesperson told Healthcare Dive.

The patents in questions were part of a portfolio of over 130 patents and patent applications obtained by Teladoc when it completed a $600 million merger in July with InTouch. Filed between 2010 and 2019, the patents include a telehealth cart with thermal imaging and touchscreen, and a documentation system for remote visits.

Teladoc says that Amwell willfully violated nine of its patents by developing four versions of telemedicine carts, its Horus HD Digital Scope System and its Thinklabs One Digital Stethoscope. It claims in the suit that it “suffered and will continue to suffer damages” as a result, and that it is “entitled to recover from Amwell the damages adequate to compensate for such infringement in an amount to be determined at trial,” as well as reimbursement for attorney and legal fees, and any other relief the court grants.

Teladoc first threatened action in the letter it sent back in September to Amwell CEOs Ido and Roy Schoenberg, in which it listed the alleged patent infringements.

Being unable to develop and manufacture the devices, however, would not do much damage to Amwell, as its Carepoints devices and technology business, the category of the products listed in the suit, represent only about 5% of its revenue, according to Healthcare Dive.

The conflict between the two is the not first, having previously gone to court in 2015 when Amwell accused Teladoc of allegedly infringing on a patent from 2007. The suit was dismissed in 2016.