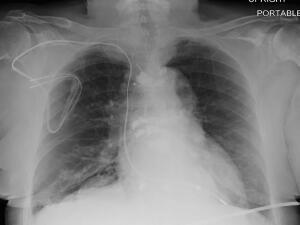 While prior research has demonstrated the safety of performing MR procedures on patients with non-MR-conditional devices, not all groups have been accounted for. This includes pacemaker-dependent ICD patients, those with abandoned or fractured leads, patients whose hearts won’t function if their defibrillator is removed or stops working, and those undergoing chest and cardiac MR exams.

"The findings of this study should decrease the level of concern regarding performing MRs in patients with implanted cardiac devices," study lead author Dr. Sanjaya Gupta, of Saint Luke’s Mid America Heart Institute in Kansas City, Missouri, told HCB News. "Essentially, this study shows that virtually all patients with an implanted cardiac electronic device can undergo MR scans safely, regardless if their device is labeled as MR-conditional by the FDA. As we collectively gain more experience with protocols like the one featured in our study, more and more hospitals will offer MR scans to their patients with non-MR-conditional devices."

While all implants today are MR compatible, millions of people worldwide, including young people, have older devices that are not considered compatible. MR scans are often discouraged for patients with implanted cardiac devices (unless the FDA has deemed the device MR-conditional) out of fear that the scanner’s magnet will heat the metal in the devices, potentially disrupting it or damaging heart tissue. This leads clinicians to choose between removing a necessary cardiac device or performing an alternative and potentially less-effective imaging procedure.

Gupta and his colleagues established the Patient Registry of Magnetic Resonance Imaging in Non-Approved Devices (PROMeNADe) and enrolled over 500 participants who underwent 608 MR exams, including 61 cardiac MR tests. This included people from groups not accounted for in previous research.

Devices were checked before and after each MR procedure, with vital signs closely monitored by a nurse during scanning. Devices were also put on asynchronous mode in pacemaker-dependent patients before they were scanned, while ICD patients had tachycardia therapies disabled during their exams.

The study reported no adverse events and showed that MR exams, including chest MR, can be performed safely in pacemaker-dependent ICD patients and those with non-MR-conditional devices or abandoned leads. It also demonstrated changes in care, according to a survey of physicians who referred patients for MR. Response from 150 physicians indicated that MR changed the suspected diagnosis 25% of the time, and changed the suspected prognosis in 26% of patients, with planned medical or surgical treatment changing 42% of the time.

The registry is the largest series of MR scans ever put together in patients with pacemaker-dependent ICDs, the second largest for patients with abandoned or fractured leads, and the third largest in non-compatible devices. While the findings for all other patients included in this study have been duplicated by several other large studies, Gupta says the standard of care has not changed and most hospitals are not performing MRs on these patients.

"What is needed is for a consensus statement to come out from the major cardiology specialty societies that looks at all the available literature, including this study, and takes an official position that MRs in these patients with non-MR-conditional devices can be performed safely," he said. "This might push the FDA toward removing the MR non-conditional label from these devices or at least make hospitals more likely to adopt protocols like the one in our study."

The findings were published in Radiology: Cardiothoracic Imaging.