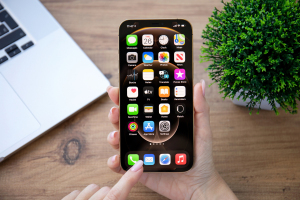 A new feature of the Apple iPhone 12 series can potentially interfere with the proper functioning of cardiac implanted devices
For patients with cardiac implants, the Apple iPhone 12 series may not be the best mobile devices to use. This is because of a new feature in the phone that can deactivate or interfere with the functioning of their implants.

Researchers at Henry Ford Heart and Vascular Institute discovered a strong magnet in the phone can turn off a defibrillator or deliver electrical pulses to a pacemaker that cause the heart to beat out of sync when the phone is placed near a patient’s chest. This can result in a potentially lethal condition called ventricular fibrillation, a condition in which ventricles of the heart quiver instead of pumping normally due to disorganized electrical activity.

“Obviously, we can’t perform surgery every time we need to control one of these devices, which is why they are engineered to allow us to use strong magnets over the chest to control their function,” said cardiologist and lead investigator Dr. Gurjit Singh in a statement. “So, we began to wonder if the magnet in the iPhone 12 would affect the safe operation of these devices.”

The magnet is used to align the phone on Apple’s MagSafe accessory for maximized charging. Singh and his colleagues passed an iPhone 12 Pro over the chest of a patient with an implantable defibrillator. The device was deactivated and its functions were suspended. When the phone was taken away from the patient’s chest, the defibrillator began functioning properly again.

“We were all stunned,” said Singh. “We had assumed that the magnet would be too weak in a phone to trip the defibrillator’s magnetic switch.”

The researchers immediately drafted a manuscript of their findings that caught the attention of the FDA and the Association for the Advancement of Medical Instrumentation (AAMI) upon being published. It also was seen by Apple, which published a warning on its website in late January.

“Medical devices such as implanted pacemakers and defibrillators might contain sensors that respond to magnets and radios when in close contact. To avoid any potential interactions with these devices, keep your iPhone and MagSafe accessories a safe distance away from your device (more than 6 inches / 15 cm apart or more than 12 inches / 30 cm apart if wirelessly charging). But consult with your physician and your device manufacturer for specific guidelines,” wrote the company.

The FDA is now conducting tests on the risks these magnets pose to defibrillators and pacemaker patients. Singh and his colleagues are planning a more thorough study of all major defibrillator and pacemaker brands to evaluate their interactions with strong magnets in the iPhone 12 and other portable devices. They advise anyone with an iPhone 12 or phones with magnetic cases and devices containing magnets to keep them at least six inches away from their chest at all times.