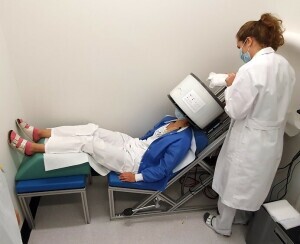 NeuroLF
Positrigo, the inventor of an ultra-compact PET system for head scanning, has produced successful results in a clinical study of a prototype for its device.

Working with the University Hospital Zurich, the startup found its solution, NeuroLF, gave patients a more comfortable experience compared to whole-body scanning, and showed feasibility for human brain in vivo imaging. The final product may help detect early signs of dementia and other brain-related disorders.

The study was called ExploreBPET (Exploratory Study of BPET) and helped identify areas of improvement for the next generation of the system.

“We expect that neurologists who have to diagnose and offer treatments to Alzheimer's disease patients will benefit the most from NeuroLF," Stefan Bircher, vice president of business development and marketing at Positrigo, told HCB News. "This initial study was done with the so-called BPET (brain PET) device, which is a prototype of the commercial device called NeuroLF. NeuroLF will have improved performance in regard to imaging quality, ease of use, patient comfort and general appearance."

A small-aperture PET scanner, the BPET prototype was tested on 10 patients who had just finished their regulatory scheduled PET exams on a clinical whole-body PET/CT system. Nine out of 10 said they liked that they could sit, rather than lie down like they have to in whole-body scanners. Eight also liked being able to look out during BPET scans.

Preliminary results and image quality were promising. While performance is comparable to existing clinical PET systems and in line with the company's initial design targets, some aspects require further development. One is limitations found within the bias supply architecture with the bias current at higher rates. As it cannot sustain nominal over-voltage, this degrades the system's performance.

Using these findings, Positrigo plans to improve the image quality, ease of use, patient comfort and general appearance of the final product. It also will make adjustments to the system's geometry, the detector and timing performance and tomographic image reconstruction, including normalization and more sophisticated scatter correction.

The study, according to the company, shows that PET imaging can be performed in a highly constrained location. Positrigo is working with clinicians and researchers to create a scientific presentation of the results for upcoming conferences. It plans to conduct further studies over the next year on its improved NeuroLF product and clinically evaluate its various applications.

“The device will have to meet the requirements given by the regulators in Europe (CE mark) and the U.S. (FDA clearance). We are well underway to get these approvals in the future thanks to clinical trials we plan to conduct together with our clinical partners in Europe and the U.S.," said Bircher.