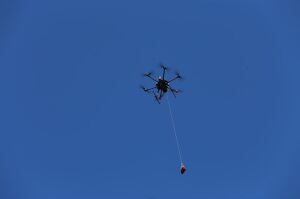 Drones may be able to deliver AEDs in the future to help save cardiac arrest patients before ambulances arrive
Drones could potentially save people with suspected cardiac arrest by delivering external defibrillators to them before emergency teams arrive on scene.

Researchers from Sweden discussed this possibility at ESC Congress 2021 in conjunction with a recent study they conducted that showed that drones were able to deliver automated external defibrillators to patients nearly two minutes before ambulances arrived. They said that such deliveries can make all the difference in suspected cardiac arrest cases, where each minute without treatment decreases chances of survival by 10%.

The study is the first to deploy drones with AEDs in real-life emergency situations, according to study author Dr. Sofia Schierbeck, a Ph.D. student at Karolinska University Hospital in Stockholm. As drone technology improves it should be possible to increase the number of patients and the time benefits.

For the study, three drones were set up in three distinct locations. When a suspected cardiac arrest occurred in one of these areas, the dispatch center alerted drone pilots who would dispatch a drone. The device would descend to 30 meter altitude at the scene upon arrival with the AED beeping to alert bystanders with the victim. Each had a 5 km radius flight range and were placed in remotely surveilled hangars, fully integrated with emergency medical service, a dispatch center and aviation control.

Out of 14 cases, 12 involved a drone. An AED was successfully delivered onsite in 11 (92%) cases. Drones arrived earlier than ambulances in 64% of cases, with a median time benefit of 1:52 minutes. Median distance was 3.1 km.

Three prior studies had similar findings, with one that was also in Sweden showing AED-equipped drones arriving before EMS responders 93 percent of the time in rural cardiac arrest cases and saving an average of 19 minutes in travel time. Another in Utah showed one minute faster response in 90.3% of cases and one in Toronto showed faster response by three minutes in 94.6% of cases.

While helpful, drones still face a number of limitations, according to the research team. For instance, a total of 39 cases could not be included in the study due to rain, heavy wind, high risk buildings and no-fly zones. Drone software was also pre-set to avoid routes above densely populated areas. “By 2022 we should have drones capable of flying in darkness and in moderate rain. Longer battery life could increase the flight range and the number of inhabitants covered by one drone,” said Schierbeck.
1(current)
2