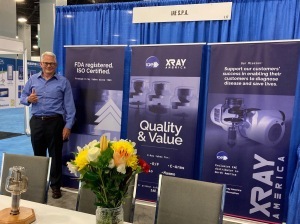 David Hurlock at the X-ray America booth at FIME 2021
I've been attending FIME since it was first established, it must have been 25 years ago. I've watched the show grow. I watched it be acquired by Informa and move from South Beach to Orlando and back to South Beach.

In February of 2020 we sent our staff home in a response to the emerging COVID-19 pandemic. We lived through some horrible times here in New York City and as a result we were all pretty paranoid.

Our management team made the decision not to attend any trade shows for fear that we will be exposing our employees to the virus.

However not everybody agrees with this approach and for many people things are back to business as usual.

I happened to be speaking with industry icon David Hurlock today just as he was entering the FIME show. He told me that the show is very well attended. He was concerned that people from outside the United States would have difficulty visiting us, but that has not been the case.

We don't have an exact figure yet but David estimated that there has to be somewhere around 400 or 425 exhibitors.

FIME is one of those shows, similar to Arab Health, that doesn't specialize in just ultrasound or molecular or radiology but there's a little bit of everything including cosmetics.

Later in the day David confirmed that the first day of the show was a success. Visitors from North, Central and South America were in attendance. On day one, traffic at his X-ray America booth was steady, and he heard the same from other exhibitors.

Everyone seems to be eager to get back to business. FIME management imposed a mask requirement, and David reported complete compliance by exhibitors and attendees.

I forgot to ask David if his wife Denise is with him. I hope so because South Beach is a lot of fun.