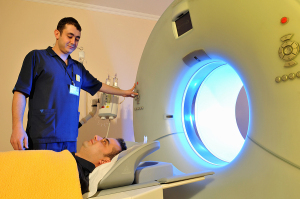 Their support for the approach is based on the result of a first-of-its-kind, multicenter study they conducted that found CMR diagnosis to be accurate in 98.4% of patients.

Currently, if no cardiac tumor is found with the method, no further testing is conducted. But data validating the approach and its efficacy is limited. Chetan Shenoy, an associate professor in the Department of Medicine’s Cardiovascular Division at the U of M Medical School, told HCB News that he set out to address this in the study, which he led. “Our findings support the use of CMR as the technique of choice for the assessment of patients with suspected cardiac tumors, instead of multiple other techniques. CMR can be a "one-stop shop" for imaging to get the diagnosis and know what to do next for management. Of course, some patients who have tumors may need a biopsy, surgery, chemotherapy and/or radiation, but CMR can be the only imaging study they need.”

Shenoy and his colleagues used CMR on 903 patients at four different institutions. In addition to its high accuracy, CMR diagnosis was ranked as a powerful and independent predictor of death, with its prognostic value incremental to clinical factors.

Providers often rely on other forms of imaging such as transthoracic echocardiography, transesophageal echocardiography, CT imaging and PET imaging for assessing cases of suspected cardiac tumors. They often try more than one test depending on their personal preferences, expertise and local availability until they find the correct diagnosis. By validating the approach, the findings indicate that providers can avoid other tests and just apply CMR to collect all the data they need to treat such patients. This reduces time in diagnosing patients and also saves on cost.

Additional benefits include the fact that MR is nonionizing and noninvasive. The one downside is the length of time required for scans, which can make it difficult for patients to lie still. Efforts, however, to address this issue are underway. Philips and the Spanish National Center for Cardiovascular Research recently developed a new approach known as Enhanced SENSE by Static Outer-volume Subtraction (ESSOS). It is expected to increase the use of cardiac exams by improving patient comfort with shorter scan time, increasing patient access to precision diagnosis and lowering the cost of care.
1(current)
2