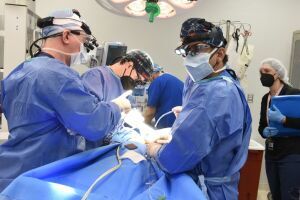 The 57-year-old patient was a dead man walking.

“It was either die or do this transplant. I want to live. I know it's a shot in the dark, but it's my last choice,” said David Bennett, the patient, a day before the historic surgery would put a genetically-modified pig heart into his chest.

The groundbreaking procedure, performed by University of Maryland School of Medicine (UMSOM) faculty at the University of Maryland Medical Center (UMMC), was the only option left for the Maryland man after he had been “deemed ineligible for a conventional heart transplant” based on his medical records — at UMMC as well as a number of other leading transplant centers, according to a center statement.

The breakthrough transplant has shown, for the first time, that an animal heart can take the place of a human one without immediate rejection — the dominant risk in any transplant surgery.

The surgery is the next step in “solving the organ shortage crisis,” noted Dr. Bartley P. Griffith, who led the team that transplanted the pig heart into Bennett. Griffith, a transplant surgery professor at UMSOM and director of the Cardiac Transplant Program at UMMC, told the New York Times after the successful 8-hour surgery, “It creates the pulse, it creates the pressure, it is his heart,” adding, “It’s working, and it looks normal. We are thrilled, but we don’t know what tomorrow will bring us. This has never been done before.”

The transplant is so cutting-edge that The U.S. Food and Drug Administration had to grant emergency compassionate use authorization for the procedure.

“The FDA used our data and data on the experimental pig to authorize the transplant in an end-stage heart disease patient who had no other treatment options," said UMSOM professor of surgery, Muhammad M. Mohiuddin, who established the Cardiac Xenotransplantation Program with Dr. Griffith, and also led the transplant team.

In addition to helping Bennett, the procedure yielded “valuable information to help the medical community improve this potentially lifesaving method in future patients,” he noted.

This new knowledge is critical because the present organ shortage is severe. Nearly 110,000 Americans are now awaiting a transplant, and over 6,000 patients die each year before they can have one of the lifesaving procedures.