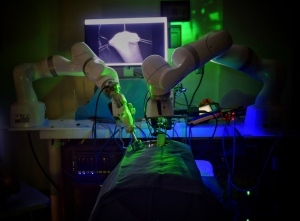 Equipped with features for enhanced autonomy and improved surgical precision, the Smart Tissue Autonomous Robot (STAR) performed an intestinal anastomosis to connect two ends of a pig’s intestines without the guiding hands of a human. The achievement is seen as a step toward utilizing robotics to perform fully automated surgery on humans.

The solution was created by researchers at Johns Hopkins University in Maryland in collaboration with the Children’s National Hospital in Washington, D.C. It is a vision-guided system designed specifically to suture soft tissue; a procedure known as anastomosis. The procedure is considered to be one of the most challenging gastrointestinal surgeries, as it requires the surgeon to suture with high accuracy and consistency.

Even a slight hand tremor or misplaced stitch can lead to a leak that can be detrimental and create complications for the patient, according to senior author Axel Krieger, an assistant professor of mechanical engineering at Johns Hopkins’ Whiting School of Engineering. “STAR is currently used to complete the anastomosis step, because autonomous robots excel at tasks that require repetition with high accuracy and precision. In the clinical setting, we imagine that the surgeon will manually control the robot for the tissue removal steps of surgery, and then use the autonomous setting to complete the anastomosis at the end of the procedure,” he told HCB News.

The robot performed an intestinal anastomosis in four animals and showed better results than humans who performed the same procedure. A previous model in 2016 was also able to repair a pig’s intestines accurately but required a large incision to be made and more guidance from humans.
In addition to its specialized suturing tools, STAR comes with state-of-the-art imaging systems to help it better visualize the surgical field. It also has a novel control system that adjusts surgical plans in real time, just like a human surgeon. This allows it to adapt quickly to changes in soft-tissue surgery, which can be unpredictable.

Jin Kang, a Johns Hopkins professor of electrical and computer engineering who helped create the robot, and his students designed a structural light-based 3D endoscope and machine learning-based tracking algorithm to guide STAR. The 3D endoscope enables the robot to generate surgical plans. The system also uses near infra-red imaging to track near-infrared fluorescent markers that have been placed on the tissue and indicate signs of tissue deformations. “When motion of the tissues exceeds a threshold, the system will generate new surgical plans from the structured light camera,” said author Justin Opfermann, a Ph.D. student.
1(current)
2