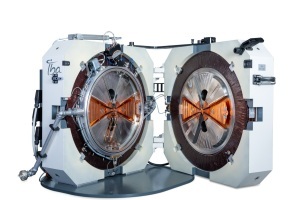 Known as Cyclone KEY, the solution is meant to create more accessibility for these practices to this PET imaging technology. The machine has a proton acceleration of up to 9.2 megaelectron volts (MeV) and a footprint of 80m², one of the smallest footprints of all clinical cyclotrons.

With the solution, hospitals can produce three major radioisotopes: Fluorine-18, Carbon-11 and Ammonia-13. From the three of them, they can produce several others such as 18FDG for cancer diagnostics, which is used in more than 90% of PET exams. Others include Na18F for bone scans, 18F-PSMA for prostate cancer imaging, 13NH3 applied in cardiology imaging, and compounds based on carbon-11 for neurology application and drug development.

The solution recently made its debut in January at Arab Health 2022 in Dubai, UAE. “Some small and medium-sized hospitals require in-house PET compound production to get their independence for a consistent and reliable supply, but also to optimize their costs. Indeed, when hospitals run more exams (for example, two PET scanners instead of one), investing in their own production facility could make them more profitable,” Bruno Scutnaire, executive vice-president of IBA's RadioPharmaSolutions Division, told HCB News.

Small and medium-sized hospitals usually rely on local radiopharmaceutical suppliers. But some areas lack any suppliers, which is a problem due to the average lifetime of PET compounds being around two hours. Additionally, some suppliers may not offer all compounds needed.

The small footprint allows Cyclone KEY to be easily installed, operated and easy to fit into existing hospitals. It is also designed to be user-friendly and cost-effective. It is meant to help address these challenges, as well as minimize the cost that hospitals would have to pay to set up their own radiopharmaceutical production facilities.

Cyclone KEY’s design is based on that of IBA’s Cyclone KIUBE, a fixed-energy cyclotron that accelerates negative ions up to 18 MeV and can generate up to 300 doses of FDG (fluorodeoxyglucose) in two hours. Cyclone KEY is not expected to compete with Cyclone KIUBE or have a significant impact on the higher-end radiopharmaceutical market.

Among its targeted demographics are practices in China, Latin America, Africa and island markets.

“The major change we are envisioning with the Cyclone KEY is making PET imaging accessible in areas where this technology is not yet available,” said Scutnaire. “As a new compact low-energy cyclotron, the Cyclone KEY is definitely a promising solution in Africa, China, LATAM countries and everywhere where the supply of radiopharmaceuticals is limited.”