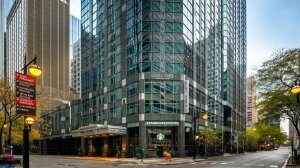 The 419-room building expands the hospital system’s downtown campus, which continues to grow to the point where some physician groups and administrative staff have moved out of hospitals and into nearby office buildings, reported Crain's Chicago Business. The purchasing price was not disclosed.

Built in 1999 and owned by Sunstone Hotel Investors since 2012, the 17-story property is the first purchase of a traditional hotel undertaken by Northwestern and could eventually be used, at least partially, for different purposes as the hospital continues to grow. For now, it “will provide patients and their families an option for convenient overnight accommodations while receiving care at Northwestern Medicine. It will also be an important asset for hosting conferences and events," Northwestern Memorial Hospital spokesman Chris King said in a statement.

Motivating Sunstone’s decision to sell was the lack of business travelers staying at the hotel. The pandemic has cut down on and made business visits scarcer than leisure stays. Revenue per available room averaged just under $78 at downtown hotels in December. While higher than December 2020 average revenue, the figure was just 75% of that in December 2019. As a result, hotels like the one bought by Northwestern are likely to be sold at relatively low prices.

The Thompson Chicago hotel and the Talbott Hotel both sold last year for close to $300,000 per room. The Talbott purchase price was below the previous owner’s total investment in the property, which was significantly renovated, according to Crain’s Chicago Business. Sunstone has two remaining Chicago hotels, the Embassy Suites by Hilton Chicago and the Hilton Garden Inn Chicago Downtown/Magnificent Mile on the market. Both have a combined 725 rooms and are expected to sell for close to $130 million, reported Crain's Chicago Business.

Northwestern has owned a number of hospitality properties on its campus. It previously managed the Galter Carriage House on Chicago Avenue, a mixed-use building that rented out rooms and apartments for more than eight decades before being demolished in 2006. The healthcare system also owns the Worcester House on Person Street, which offers apartments and short-term rental rooms to patients and some employees.

It previously invested $77.6 million in another expansion back in 2020 where it added nearly 50 beds and put in a three-story connecting structure between a pair of its Streeterville buildings, the Feinberg and Galter pavilions on the hospital’s campus in River North.

The purpose was to reduce ED overcrowding and patient backlogs that led patients to leave before being screened and the hospital to turn away ambulances. The additional beds were a mix of 24 for intensive care and 25 for medical and surgical patients that increased the hospital's total capacity to 943.