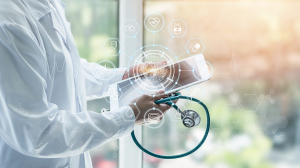 The decision to do so was made after reports came in of patients receiving the records of other people instead of their own, reported NBC News4 Washington.

"DC Health is aware that a small number of residents have experienced issues while using the DVR system during a period of high utilization this afternoon," a spokesperson said in the report. "We are currently remediating this issue and the site is temporarily offline for maintenance. We ask that residents monitor our social platforms to learn when the site is back up and running."

The portal was launched on Monday, February 14 and taken down on Tuesday, February 15 after DC learned the issue was not an isolated incident.

"I received a gentleman’s vaccine card with a QR code, and it was not my information. So I panicked because I didn't want to have somebody else's health records," D.C. resident Katherine told News4 on Wednesday via a video interview. She asked that her last name not be used.

Residents are supposed to be able to enter their name, birthdate and phone number in the portal and receive a link that shows this information, as well as the dates and types of each vaccine they received. While some people were able to see this information for themselves, others received the records of other individuals, without a name or birthdate in common.

A spokesperson for Mayor Muriel Bowser said about 30 people complained to the health department about the issue but that it is unclear how many in total have been affected.

The Digital Vaccine Record Portal is designed to show the same information as a CDC paper vaccine card. The information is required to frequent restaurants and bars in the capital for anyone 12 and older, as well as for sports venues, gyms, nightclubs and conference centers. Visitors to any of these establishments must have both shots of Pfizer or Moderna or one shot of Johnson & Johnson, according to WTOP.