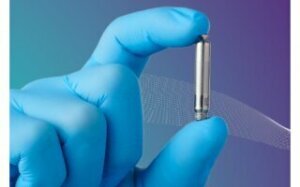 The procedure was conducted as part of a clinical trial focused on creating a more targeted and less invasive approach for treating heart rhythm patients with fewer complications.

Unlike traditional pacemakers, the leadless pacemakers do not require wires or incisions to be implanted. They also are one-tenth the size and implanted directly into the heart instead of under the skin near the collarbone. This results in fewer complications for patients, as shown in prior studies. Cleveland Clinic previously implanted its first single-chamber leadless pacemaker in 2014. But these devices are only efficient in 10% of patients, while the remainder require multi-chamber pacing.

“Until now, pacemakers have only been able to pace one chamber at a time. This new system allows electrical signals to be sent to both sets of the contracting muscles to help provide the needed pacing,” said Dr. Daniel Cantillon, research director and associate section head of cardiac electrophysiology and pacing in the Heart, Vascular & Thoracic Institute at Cleveland Clinic, and clinical trial steering committee co-chair.

Like single-chamber leadless pacemaker, the Aveir solution can be changed every seven or eight years through the same procedure, in which a catheter is used to retrieve the implant. Another is inserted in its place the same way. The system also provides real-time heart mapping when implanted to help physicians assess its efficiency and adjust its positioning before the procedure is complete.

The single-arm study will evaluate 550 patients with abnormal heart rhythms at up to 80 sites worldwide on the safety, performance and effectiveness of the pacemaker system. The first implant to be part of it was completed at Na Homolce Hospital in Prague.

Complications with traditional pacemakers arise in one out of six patients within three years of receiving one, according to studies. These issues are most commonly bleeding or infection in the surgical pocket or dislodgement, fracture or blood clots around the wires.

A number of innovations in pacemaker design are underway to better care for cardiac patients. Scientists in New Zealand just last month, for instance, announced their recruitment effort for a trial that will test a pacemaker designed to reestablish the heart’s naturally irregular heart rhythm and reverse heart failure.

Whereas pacemakers on the market pace the heart metronomically in a steady, even pace, the University of Auckland researchers have created a device that paces the heart based on inhalation and exhalation signals to establish a naturally irregular heartbeat. They say it improves the ability of the heart to pump blood throughout the body by 20% and allows essential contractile proteins to reemerge and realign.