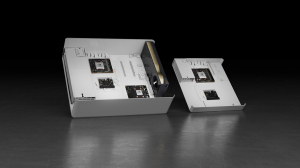 The solution is a follow-up to the NVIDIA Clara Holoscan platform, which launched in November 2021 and is designed to give developers a computing system and tools needed to commercialize new products, while reducing the engineering investment required. The platform does so by connecting medical devices and edge servers, which are entry points into networks. This allows the applications to perform continuously in real time, while passing on more complex tasks to data center resources to process, predict, and visualize data in real time for AI-supported medical technologies.

Clara Holoscan MGX builds on this by processing high-throughput data streams for real-time insights that can be used to create and train AI solutions for various forms of research and disease treatment. The solution is a scalable platform that enables AI to perform as many as 254 to 619 trillion operations per second, Kimberly Powell, vice president of healthcare at NVIDIA, told HCB News. “NVIDIA Clara Holoscan is packed with AI performance and is scalable to be able to deploy tens to hundreds of AI applications, creating 100 to 1000 times the business model opportunity."

Building and commercializing a medical device requires an engineering team to build computer systems that come with a diverse set of FPGA, networking, CPU and GPU hardware. They then have to build a software platform that can run the clinical applications.

Clara Holoscan MGX consists of an all-in-one medical-grade reference architecture. The 3-chip hardware, known as the MGX Computer is made up of the company’s Jetson AGX Orin module (ARM CPU), Connect-X SmartNIC network adapter (high-speed networking) and RTX A6000 (GPU). It comes with a coherent software, the MGX Stack, for the operating system, drivers, AI, acceleration and advanced graphics.

Last fall, the company released the Clara Holoscan Developer Kit and SDK to offer developers a prototype and SDK environment where they could create new, real-time AI applications. The Clara Holoscan SDK is specifically designed for high-performance streaming applications to build the next generation of software-defined instruments. It brings together pretrained models, as well as a framework for scalable microservices, to allow applications to be managed and deployed both on devices and on the edge data center for a strong software-as-a-service business model.