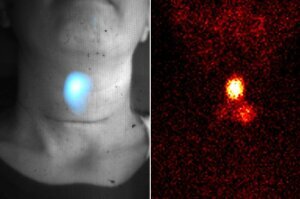 Their approach involves using specialized cameras that can detect Cerenkov light, a faint glow emitted by radioactive tracers that PET scans require to detect increased glucose metabolism, a hallmark of cancer cells that helps show the location of a tumor. At a fraction of the cost, the technique could allow for the use of these radioactive tracers without the scanner.

The trial is the largest to date involving Cerenkov light, which is a reaction caused by charged electrons or positrons traveling faster than light through the same medium. It is described as a type of visual sonic boom and has only been recently considered for use in biomedical engineering, according to Dr. Jan Grimm, a radiologist and molecular imaging specialist at Memorial Sloan Kettering Cancer Center (MSK).

“It wouldn’t replace PET because it cannot provide the same level of detail, precise measurement or depth penetration. But having a cheaper and faster imaging approach to select patients that should undergo a PET scan or as a first-line test could provide a huge benefit to many developing areas,” he said in a statement.

At about $1.5 million, PET machines are often too expensive for practices in rural and developing countries, which may not have the necessary infrastructure needed anyway to house them.

In the trial, Grimm and his colleagues assessed the effectiveness of Cerenkov light on nearly 100 patients who sat in a chair inside an enclosure for about 10 minutes. The only light used was the Cerenkov light coming from the radiotracer inside their bodies, with the camera detecting it through a fiber leading from inside the box to the camera outside. The light is too weak for the naked eye to see and because it is emitted so low, it requires very sensitive cameras and very dark surroundings to detect the signal.

They found that it was as accurate with five different radiotracers in locating tumors as PET and CT. In patients who underwent radiation therapy, it also provided information on whether their tumors were shrinking or responding in other ways to treatment.

Grimm’s lab has been assessing various uses for Cerenkov light over the past decade and has found that it is able to provide information about a tumor’s molecular activity. To overcome the low emission challenge, it developed the fiberscope connected to the camera and an enclosure that blocks all light. Essentially a black box, the enclosure has three regular sides and a curtain on the fourth that can be pulled shut. Its development was funded with a grant from the National Cancer Institute.

Grimm is already researching further improvements that can be made to increase the technique’s efficiencies, including imaging the entire body versus specific sites, using imaging to guide surgical procedures, and using a more sensitive camera to make image acquisition faster and easier.

“This setup could be wheeled in wherever needed to do imaging, making it useful in many places that can’t have PET imaging readily available,” said Dr. Edwin Pratt, a Ph.D. student at Weill Cornell Medical College and a member of the Jason Lewis Lab at MSK. “It could offer screening away from a hospital as a first-line imaging test. And then, if something odd is seen that needs closer examination, you can redirect the patient to a comprehensive cancer center or similar place for a PET scan.”

The findings were published in Nature Biomedical Engineering.