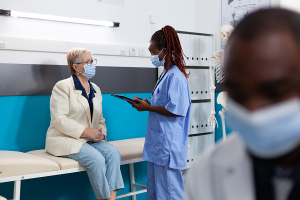 Owned by U.S. company Centene Corporation, the organization runs 70 practices in England and serves almost 600,000 NHS patients. Undercover reporter Jacqui Wakefield worked as a receptionist in one of its 51 London surgeries and found that the practice was short of eight doctors and hiring PAs because they were “cheaper," reported BBC Panorama.

PAs have fewer years of training than GPs and are meant to help diagnose and manage patients so doctors can focus on more complex patient needs. They require clinical supervision.

Operose Health employs six times as many PAs as the NHS average but only half as many GPs, which there is currently a shortage of in the U.K. PAs told Wakefield that they sometimes saw all sorts of patients with no doctor supervision, and that the practice treats them as equivalent to GPs. “They were doing the same job as us, with less experience, less qualifications and earning less money," a former Operose Health GP told the reporter, anonymously.

Operose Health denies this, saying it uses PAs in accordance with NHS England’s long-term plan and that a clinical lead is available most of the time to answer PA questions. It also says it has recruited 38 GPs in the last 12 months and is currently hiring 14 others.

The reporter also found a backlog of thousands of medical test results and hospital letters, with some left unreviewed for up to six months. "If a letter destined for the GP is not being acted on for six months, that is a massive risk to patients, both in terms of the development of a more serious disease and them dying earlier,” said professor Sir Sam Everington, a senior practicing GP at an unconnected partner-run practice.

He has accused Operose Health of "putting profits, money ahead of quality of care,” and says the country’s independent regulator, the Care Quality Commission, must investigate.

The company also denies this and says it works to “ensure that clinicians receive accurate and well-coded documentation in a timely manner,” and that its processes are "audited monthly”.

The Care Quality Commission says it takes all concerns seriously and will follow-up as appropriate.