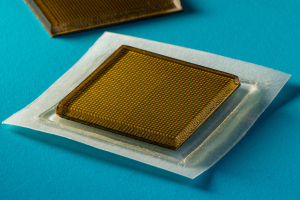 The adhesive patch images a patient's insides for up to 48 hours and indicates when earlier intervention is necessary.
A new stick-on ultrasound patch could be all that’s needed to image a person’s insides and identify diseases early on.

Researchers at Massachusetts Institute of Technology have designed this very solution for imaging blood vessels, the digestive system and internal organs for up to 48 hours.

As small as a postage stamp, the patch uses an array of tiny sensors to apply ultrasonic waves through the skin and into the body. The waves bounce off the blood vessels, tissues and internal organs detected by the same elements in the patch to create reflections. An instrument connected to the patch turns these reflections into high-resolution images, according to The Guardian.

Professor Xuanhe Zhao, who led the research team, says the patch could provide a more detailed understanding of a patient’s health, compared to scans performed in hospitals. He and his team are also working to create a wireless version that can be accessed via mobile phones.

“Because there are already wireless point-of-care handheld ultrasounds, we are confident that we will be able to achieve the wireless version in a few years,” he told The Guardian.

The patches were used in lab tests to watch people’s heart change shape when exercising, their stomach expand and shrink as they drank and urinated, and their muscles incur microdamage while lifting weights. The stickers were strongly adhesive and also imaged patient's organs while they performed tasks such as sitting, standing, jogging and biking.

Zhao expects them to eventually be available over the counter, and paired with smart algorithms to monitor the heart, lungs and digestive systems, as well as the muscles during rehabilitation or physical training. They also could be used to monitor bladder function, tumors and fetus development.

Additionally, the bioadhesive ultrasound could automate conventional ultrasound exams, which are brief because patients must stay still, and require highly trained sonographers.

The findings were published in Science.