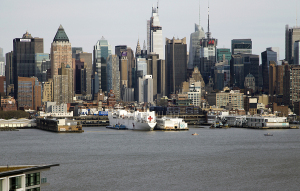 This, according to a study by the Lown Institute, a healthcare think tank, is a fair share deficit, where investments are less than that of federal, state, and local tax exemptions. In exchange for tax breaks, nonprofit hospitals must provide free and discounted care and invest in improving their communities.

The total fair share deficit was enough to triple what the city spends annually on school meals; create thousands of new affordable housing units; or pay off the medical debt of every patient that a New York hospital sued over the past five years, according to the report.

New York-Presbyterian Hospital had the greatest deficit, at $359 million, almost half the full deficit. Behind it were New York University Langone Medical Center, at $167 million, and Mount Sinai Hospital, at $98 million. The three made up 85% of the total deficit, reported RevCycleIntelligence.

While it is not clear if investments must equal the value of tax exemptions, Aaron Toleos, vice president of communications for the Lown Institute, says investing the same amount is only rational.

“Our premise is that nonprofit hospitals should be expected to give back to communities in amounts at least equal to what they received in tax breaks,” he told HCB News.

Among the 21 hospitals the Lown Institute studied, 12 spent more than what they got back, with Montefiore Medical Center having a surplus of $76 million.

While more hospitals gave beyond their exemption amounts, the total fair share surplus was $292 million, less than half of the total deficit.