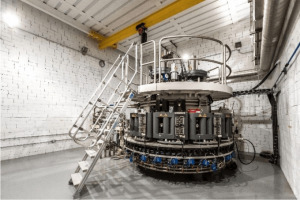 Electron accelerator that will be used for Mo-99 production at NorthStar's newly completed facility
NorthStar Medical Radioisotopes has completed construction and equipment installation at its facility in Beloit, Wisconsin, where it will produce the medical radioisotope molybdenum-99 without the need for proliferation-sensitive materials.

For decades, the U.S. had no capability to produce Mo-99 domestically and relied entirely on imports produced with highly enriched uranium, which is also used in nuclear weapons. At the new production facility, NorthStar will become the first in the world to produce commercial-scale Mo-99 through a new method that irradiates molybdenum-100 targets using electron accelerators.

The facility also includes new, high-capacity equipment for processing and packaging Mo-99 for distribution to radiopharmacies and hospitals.

The radioisotope is used in over 40,000 SPECT imaging procedures in the U.S. each day. Once NorthStar’s newly completed facility is licensed, the company will have a combined production capability to meet nearly 40% of U.S. demand for Mo-99, a significant increase from current levels.

In 2018, NorthStar became the first U.S. company in nearly 30 years to produce non-HEU Mo-99 domestically, by irradiating and processing molybdenum-98 targets, at the University of Missouri Research Reactor.

To bolster domestic supply and reduce the risk of terrorism, the U.S. Department of Energy’s National Nuclear Security Administration has competitively awarded $245 million in cost-shared cooperative agreements to U.S. companies working to establish domestic production of Mo-99 without the use of HEU since 2012, including $109 million to NorthStar.

In parallel, NNSA also works with international producers to help them convert their production processes to use low enriched uranium, a non-weapons-usable material, instead of HEU.

NorthStar expects to complete start-up and regulatory submissions before the end of 2023.