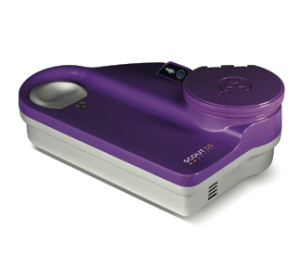 The VeraLight
SCOUT DS
An experimental device that detects both diabetes and pre-diabetes--without the need for blood tests or fasting--is in clinical trials and is expected to win FDA approval next year.

A clinician who uses Scout DS simply shines the light on a patient's arm and within a minute, it detects the presence of unusually high concentrations of advanced glycation end products (AGEs)--diabetes biomarkers--on the skin surface, says David Van Avermaete, CEO of VeraLight. The device weighs about 10 pounds.

A trial of 1,700 patients at risk for type 2 diabetes has been completed at eight U.S. sites. This phase of the trial is designed to assure the product's ability to predict abnormal glucose tolerance in a wide range of individuals, the company says.

The FDA has requested that the company conduct additional "calibrations" and VeraLight is now conducting tests among 5,000 others at risk for diabetes at 20 ambulatory-care sites, where people go to have their blood drawn, Avermaete says.

In all cases, "Scout DS" is being compared to the gold standard oral glucose tolerance test.

According to the Centers for Disease Control (CDC), diabetes currently costs the U.S. health care system a whopping $165 billion for diabetic complications and for treating the disease itself.

There are 21 million people who have the disease and 60 million more who are pre-diabetic and many pre-diabetics have not been diagnosed yet, Avermaete says.

And the situation is getting worse.

"If you are born today, you have a one-in-three chance of developing the disease. So unless we find the pre-diabetics and treat them before they develop the disease, we will literally break the back of the health care system," Van Avermaete says.

"The good news," he adds, "is if you intervene while the patient is still pre-diabetic with a change of diet and exercise, 80 percent to 90 percent of diabetes cases are probably preventable."