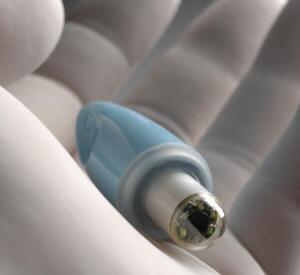 The Pillcam is
swallowed by the patient
Rather than having an endoscope thrust down their throats, patients with esophageal injury will soon be able to swallow a so-called "camera pill," no bigger than a piece of candy, which will show images of the stomach and the esophagus.

The product, called a "Pillcam" is being manufactured by Given Imaging in Israel.

Modifications to the camera, which makes it maneuverable, are being made by The Fraunhofer Society, a non-profit organization in Germany, which encourages applied science and entrepreneurial spin-offs.

Dr. Frank Volke, a Fraunhofer researcher, says that the camera will be able to diagnose cancer of the esophagus and Barrett's esophagus, a pre-cancerous condition, at its earliest stages.

"In the future, doctors will be able to stop the camera in the esophagus, move it up and down and turn it, and thus adjust the angle of the camera as required.

"This will allow doctors to make a precise examination of the junction between the esophagus and the stomach," Dr. Volke told DOTmed News.

The camera pill consists of a camera, a transmitter that sends the images to the receiver, a battery and several cold-light diodes, which briefly flare up like a flashlight each time a picture is taken.

One prototype of the camera pill has already passed its first practical test in the human body, Dr. Volke says. Researchers demonstrated that the camera can be kept in the esophagus for about 10 minutes, even if the patient is sitting upright.

He says the camera is expected to win approval in Germany and elsewhere in three to five years.