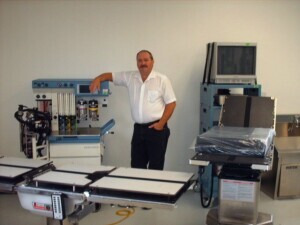 When Scott Minich, who is on the KMA Remarketing Corp.'s sales and procurement team, met Dana Smith, the company's President and CEO, both men were paramedics in Dubois, PA.

"That was 15 years ago. Dana was a physical education teacher and a part-time paramedic and he wanted to start his own business," Minich recalls.

Since then KMA Remarketing Corp. has flourished.

"When Smith and his partner, Bill Boyle, now currently the CFO, started KMA in 1993, refurbished equipment wasn't especially popular in the USA. So they started with international contacts, and since then have shipped to 43 different countries," Minich says. "I would help load the containers and pack the equipment. I was basically a warehouse guy." (At this point, Minich was still working as a paramedic for several towns in the DuBois, PA area.)

When Minich first became a full-time employee in January 2003 KMA had about 10 employees. Now the company has 23 and is planning to expand. "Five years ago, Dana felt it would be beneficial to move me into sales," Minich says. And Smith made the right move, apparently, because Minich says that this job is right up his alley.

"The equipment I'm selling is going to be used on patients, so in a roundabout way, I still have some patient contact," he says. "And while KMA has its own in-house biomeds, I need to coordinate things with them to make sure all the equipment is complete and functioning properly, so I work very closely with the biomed department. I'd say we complement each other very well.

"Anything you would find in the OR--those are our biggest selling items," Minich says. "We handle everything from anesthesia to x-rays."

As for the refurbishing business, Minich says he's in the early stages of planning a trip to Dubai in October. "The country has a big need for various types of medical equipment," he says.

Minich believes one reason for the snowballing sales in the last 10 to 15 years have been the cutbacks in Medicare reimbursement. He says the company has liquidated equipment from 15 to 20 hospitals in the past 15 years, after they went bankrupt.

"I think a lot of your smaller facilities, especially in the rural areas, are most likely to buy from us," he says. "But some users have gotten burned [by other companies]," Minich says. "Some companies 'spray and pray'. That leaves a bad taste in the mouth of people who buy the equipment. We pride ourselves on quality sales and service.

On the new equipment side of the business, KMA recently became a dealer for Biodex, which makes pain management tables and ultrasound equipment.

Minich says KMA is also working on adding new dealerships in the near future.