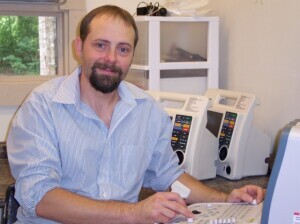 James Blount, owner of Biomed Plus, LLC, Hammond, LA, began working at a small rural hospital in Independence in 1991 as the hospital's only biomedical technician. As the hospital grew, so did the biomedical staff and Blount became the biomed manager.

"I have always had strong convictions about providing the best service available to the staff and to the patients," Blount says. "I used to tell the employees at the hospital that 'you might be using this equipment on your Mom so make sure it works like it's supposed to,'" he says.

As time went on, Blount began receiving calls from people outside the hospital, asking him to repair their equipment. Heeding their call, he began repairing medical equipment on evenings and weekends. That was in 2002. In March 2005, a California-based company called CVS (Cardiovascular Sales) contacted Blount with a proposal: they would train him to repair their ultrasound equipment if he would work with them as a subcontractor.

"They flew me to California for an interview and I accepted, Blount says. He began working for his own company, Biomed Plus LLC.

"That August [2005], Katrina came to town and changed everything," Blount recalls. The medical industry was pretty much non-existent here. Everyone had been evacuated and there was no one buying equipment in New Orleans. "For several weeks afterwards, I volunteered to work with our church to get water, food and supplies to areas hard hit by the storm."

To support his family, Blount began working part time for a company called Meyer's Yacht, installing electronics on boats. He says he is very grateful for his good friends at Meyer's Yachts and CVS who lent their support to him, his wife and his two young sons.

Today, Blount says, New Orleans is recovering and Biomed Plus and the newly restructured CVS/Soundvision continue to work together to provide equipment, sales and service to the Gulf South region and now to the Southeastern states as well. They sell and service new and refurbished equipment including: ultrasound, autoclaves, defibrillators, patient monitors, dental equipment; and sell supplies like surgical gloves and gauze. Blount has since hired two part-time biomed techs.

"We're staying very busy," he says. "We sell to both hospitals and doctors' offices." He adds," I like to deal with the end user. I like to meet the customers and help them be successful in their business."