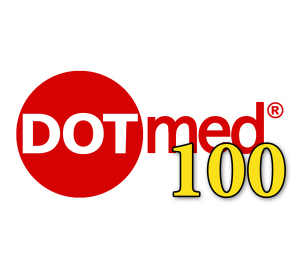 Being rated a DOTmed 100
company for 2009 is an
honor -- and an
endorsement of integrity
The DOTmed 100 designation is going to be more coveted in 2009 than ever before. Because as we did in 2008, we will feature the DOTmed 100 for 2009 in the April issue of DOTmed Business News magazine. That will put those 100 most highly rated companies in an unprecedented showcase that the entire healthcare industry will see.

If you think you deserve to be among the DOTmed 100, ask people on DOTmed that you've done business with to rate you. If you've already been rated in 2008 by other users, you're on the Nominated list. Check the link below to see if you're there.

If you've done business with someone who deserves praise and recognition, rate them. If they're not on the Nominated list, look them up in our Services Directory and click on "Rate This User."

Good ratings, and bad, all count. But please rate others fairly based on their integrity.

In addition to the powerhouse publicity the DOTmed 100 for 2009 will get from being featured in our magazine. There are many benefits that go along with winning -- such as the DOTmed 100 logo displayed in all your listings, in your Services Directory, and on your WebStore.

Here's the link to see who's been nominated:

We're sure the best companies will win this coveted designation. Good luck to you all!

Ladies and gentlemen -- start your ratings!