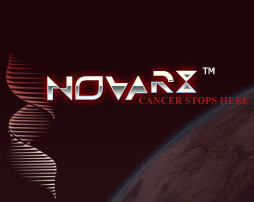 NovaRx --quietly working
on cancer innovations
Biotechnology company NovaRx is testing what may be an impressive lung cancer drug, if Phase III trials are successful.

Under the auspices of Dr. Lyudmila Bazhenova, M.D., an oncologist at San Diego Medical Center, researchers have treated their first patient with either Nova Rx's drug called Lucanix, or a placebo. Seven hundred patients are needed to complete the trial, which usually takes about a year, but one never knows how long it will take, Dr. Bazhenova tells DOTmed News.

The vaccine consists of non-small cell lung cancer cell lines derived from lung cancer patients. The cells are genetically engineered to block production of TGF-beta, a substance that tumor cells produce to both stimulate their own growth and conceal themselves from the body's immune system. Once injected, the deactivated tumor cells, their TGF-beta invisibility uncloaked, stimulate the immune system to attack other tumor cells circulating in the body.

Dr. Bazhenova compares the cancer vaccine to a standard vaccine. "When you are a kid," she says, "you are injected with dead flu virus. It's the same thing here: you are training your immune system to 'see' the virus or the cancer to stimulate an immune system attack.

Still, Dr. Bazhenova says, many biotech companies have tried to design a vaccine for cancer and have failed. She says if Lucanix wins approval, it could potentially be the next blockbuster drug, but she is careful to add, "We don't have the data to prove it yet. The trial has just started."

Phase II data was positive, though, enough so that that NovaRx was invited to present it at the prestigious American Society of Clinical Oncology (ASCO) two years ago.

Data from a study of 75 patients with advanced stages of lung cancer showed that 43 percent of them were alive two years after receiving NovaRx's vaccine. That's two times the survival rate seen with chemotherapy, the standard treatment, she says.

The trial is designed for patients with stage IIIA, IIIB, IV lung
cancer, who have completed their first round of chemotherapy and their tumors are not growing.

Note that NovaRx, a privately held San Diego company, is understandably reluctant to speak to the press so the media won't overstate the promise of the drug before proof of its efficacy is conclusive, a behavior the FDA and the medical community frown upon.