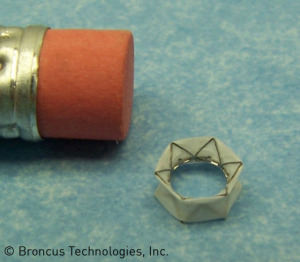 Broncus exhale stent
According to British market research firm Hoovers, "bucking bronchial conditions is what Broncus Technologies is all about." The privately held, Mountain View, CA company, is developing medical devices including bronchoscopic interventions for emphysema, a form of COPD that is a progressive lung disease, which traps air inside the lungs and causes shortness of breath.

Dr. Karl Van Gundy, a trial investigator at University of California, San Francisco (UCSF), who is leading Broncus' Phase III randomized trial there, says that the treatments on the market today try to open the air passages with medications that relax the muscles and push airways open.

"Emphysema is still the fourth or fifth cause of death in the U.S., the doctor says. "While we can't change the mortality figures, we can make patients more comfortable."

Terese Bogucki, senior director of marketing at Broncus, says that, in the procedure in question, first a bronchoscope is placed into the lung. "We look for an area that would be suitable to place a stent," she tells DOTmed News. "We make the catheters that place a hole in the airway walls of the lungs and put a stent into them to keep the passageways open. The airways are scanned with a Doppler probe--a small sensor connected to a speaker. If there's blood flow nearby, you'll hear a swishing sound. You wouldn't put a hole in there."

Seek a Quiet Area
Pulmonologists continue scanning the airway walls until there's a so-called "quiet" area with no indication of blood flow. Then, a needle is used to make a hole in the airway. A balloon on the needle enlarges the area.

"We use the Doppler probe to make sure there are no sounds of blood flowing in the area where we place the stent," Bogucki tells DOTmed. "Then we have a catheter with a stent mounted on it. That catheter is placed into the hole. A balloon is inflated to secure the stent. And then a tiny amount of a chemotherapy drug called pacilitaxel is embedded into the stent to keep tissue from growing over the stent and closing it."

Broncus makes a miniature Doppler and also has designed a stent that is much smaller than what cardiologists use, she says.

She notes that while other pulmonary trials are looking at smaller areas of the lung that are diseased, Broncus' is the only trial studying widespread emphysema. The company is hoping to finish its Phase III trial, now being conducted in about 40 sites in the the U.S., Europe and South America.

The trial is randomized, so patients don't initially know whether they have the emphysema stent or a sham, says UCSF's Dr. Van Gundy. Everyone knows within a year of receiving treatment, he says. And those patients who have the stents are followed for five years to check for improvements and complications.

Trials Funded by Venture Capitalists
The trials are being financed by venture capitalists, who last year filed preliminary documents with the SEC so they could take Broncus public. However, economic conditions this year put on hold plans for an initial public offering.

If patients and the economy breathe easier, who knows what the future may hold for this promising and innovative company.