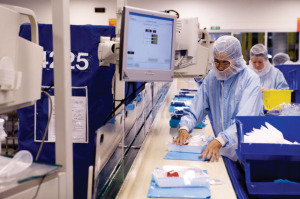 Manufacturing of
Cardinal Health's surgical kits
Cardinal Health and SRI/Surgical Express, Inc. have entered into a joint venture that will allow Cardinal to become the exclusive manufacturer of SRI Surgical's line of more than 400 disposable surgical kits.

In return, SRI will stop manufacturing disposable kits and zero in on its core business--manufacturing reusables, Troy Kirkpatrick, Cardinal's director of medical relations, tells DOTmed News. The payoff for Cardinal, he says, is that the company will be allowed to offer reusables to its existing customers who want them.

In a team effort, the two companies plan to market a combined surgical kit, dubbed the "Hybrid Preference Pack," in which SRI will combine its reusable supplies with Cardinal's disposables. "This new product will couple the convenience of disposables with the waste-wise benefits of reusable products," Kirkpatrick says.

Cardinal will manufacture the disposable surgical components for Hybrid Preference Packs and SRI Surgical will deliver and reprocess the reusable products on a daily basis to customers through its 10 reprocessing plants and four distribution enters located throughout the U.S.

Cardinal's Kirkpatrick says Cardinal assembles more than 21 million disposable surgical kits each year. "Everything from caps and gowns to scalpels and tools to be used for surgery are in the kits," he says. "Now Cardinal customers will have a reusable kit option. For example, we'll have surgical gowns made of linen that can be washed as well as paper gowns that can be thrown away. Some hospitals prefer reusable items because they reduce waste and are also environmentally friendly. On the other hand, if the hospital is looking to reduce water usage, they may go with the disposable item. Cardinal Health wants to provide both options. We don't want to dictate what the hospital wants," Kirkpatrick says.