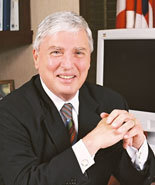 Von Eschenbach was appointed by President Bush in 2005, as the FDA was being hit with criticism from consumer groups and lawmakers who alleged the FDA's approval of Merck's anti-inflammatory drug, Vioxx, was reckless. Merck voluntarily removed the drug from the market in September 2004, after the company was accused of hiding evidence that it knew the drug caused heart attacks and strokes.

Critics also complained of the FDA's handling of the salmonella outbreak this summer.

Last month, in the wake of a major recall of tainted heparin, a blood-thinner manufactured in a Chinese factory that the FDA failed to inspect, Von Eschenbach opened three offices in China, helping to make the FDA an international regulator.

Von Eschenbach, 67, a prostate cancer specialist and cancer survivor himself, was director of the National Cancer Institute before becoming FDA chief.

He is credited with easing tensions between consumer groups and the FDA and has received high marks from both lawmakers and consumer groups, who say he is available and easy to work with. Since becoming commissioner, he has overseen a sizable increase in funding, mandated by Congress to boost the FDA's drug oversight.

Obama's list of candidates for the job reportedly includes Baltimore's health commissioner, Joshua Sharfstein, who is regarded as the leading candidate to head the FDA, according to officials close to the agency. Other possible candidates reportedly include Cleveland Clinic cardiologist Steven Nissen, as well as other eminent physicians and current and former FDA officials.

William Hubbard, a former FDA associate commissioner, has been reported as saying that new presidents usually do not nominate agency commissions until spring, after Health and Human Services fills its deputy commissioner and general counsel positions. But they say it's possible the FDA's top spot could be filled more swiftly this year, as a result of the agency's recent problems.