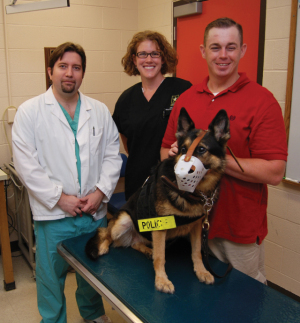 Dr. Sinisa Grozdanic;
Dr. Shara Chance;
and Jason Clark, handler,
pose with recovering Army explosive
search dog at the Iowa State
University's College of Veterinary Medicine
Photo courtesy of ISU
When Dr. Sinisa Grozdanic, an Iowa State University veterinarian with a specialty in ophthalmology, heard that an Israeli company was developing polymers that released biodegradable medicine into the tissue surrounding the eye, he contacted the company immediately to see if its CEO would let him try the polymer on dogs, Dr. Grozdanic told DOTmed News.

The dogs had an inflammatory corneal disease called pannus, which clouded their vision. Dr. Grozdanic says that pannus is predominant in German Shepherds and Greyhounds, who are four to eight years old.

Dr, Grozdanic, who is an assistant professor of veterinary clinical sciences at Iowa State's College of veterinary medicine, says the drug used for this disease, called tacrolimus, is released gradually and treats the infected eye for an entire year.

"We know it works," he says, adding that so far, he has tested the drug on six dogs. "We see approximately 20 to 40 dogs a year with this disease," he says. "Probably 90 percent will respond to eye drops. However, 10 percent of the dogs do not respond to drops. These are your 'problem children.'"

Basically, he says, pannus clouds the cornea and is detrimental to vision. Dr. Grozdanic says that companies have been trying to develop polymers that can release drugs for two decades. Israeli-based Nicast uses a technology called electrospinning. In making the implant, the needed drug is mixed with a polymer and formed into ultra-fine fibers.

"From the fibers, a fabric is created, from which numerous medical devices, including drug release devices, can be fashioned," says Benjamin Eliason, Nicast's CEO. He adds that various drugs can be incorporated into the polymer fibers and released inside the body over time.

With dogs, Dr. Grozdanic says, "the major problem is that, as noted, about 10 percent don't respond to eye drops; they get worse. The second group of patients are fidgety dogs who won't let their owners put the drops in their eyes. "We know that for this population of dogs that were suffering from incurable corneal disease in the past, we can reverse changes in the eye, or slow progression of the disease," Dr. Grozdanic says.

He plans to submit a paper on the polymer's success to one of the veterinary journals. Meanwhile, Nicast is interested in producing the polymers for use in humans as well as in animals, the company says.

Dr. Grozdanic treats his veterinary patients by making a small snip in the tissue surrounding the whites of their eyes; he closes the incision with a suture. The entire procedure takes just a few minutes and is done with local anesthesia. The drug is bound to the polymer and is gradually released into the eye. None of the dogs he operated on had been improving with the use of eye drops, he says. "But with this [polymer] method, all the dogs did well. In some, the results were spectacular, in others decent, but all were positive."

Last year, Dr. Shara Chance, who works with the US Army Veterinary Corps, diagnosed one of her patients, a German Shepherd named Gora, with pannus, Chance treated the problem with eye drops but the condition got worse, she said.

Gora is a highly trained dog who works around high-profile people and needs to be comfortable and focused on her job, Chance says.

Chance brought Gore to Dr. Grozdanic to have the procedure done. Chance is happy with the results and Gora is back at work, jumping in and out of the truck she works in and walking more confidently in crowds, Chance says.