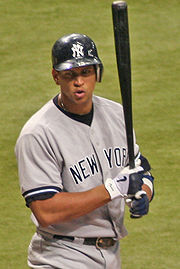 The Yankee's third baseman,
Alex Rodriguez
The hybrid method works like this: Arthroscopic surgery repaired only the labrum tear, so that Rodriguez's rehab time will be shortened and he won't be sidelined for the season. Meanwhile a more thorough procedure to repair the labrum injury will wait until after the season ends.

The initial arthroscopic step was successfully completed today, according to team doctors. Alex Rodriguez is leaving the hospital in Vail, Colo., to start rehabilitation including a stationary bicycle, isometric exercises and maybe swinging a bat as early as next week. The highest-paid player in baseball is expected to be playing for the Yankees in May, if all goes well.

"The surgery went exactly as we planned," Dr. Marc Philippon said. There were no surprises. Exactly what we prepared for was there. The labrum was repaired and the cartilage was stabilized."

A Two-Part Process
Rodriguez selected a method called the "hybrid" approach over three other approaches to arthroscopic surgery, since hybrid surgery would get him back on the playing field soonest, although he will need to undergo more complete surgery in November.

General Manager Brian Cashman said that the Yankees had been considering three different approaches for Rodriguez's labrum tear and paralabral cyst, which caused the slugger stiffness and lack of mobility.

Cashman said that Yankee doctors could either watch and see how Rodriguez got through the season, drain his cyst and allow him more flexibility, or select a complete surgical procedure that would sideline the prized player for approximately four months.

When the cyst was drained last Wednesday, Dr. Philippon -- a noted hip specialist with the Steadman-Hawkins Clinic in Vail--suggested a fourth option, which all agreed would be the best one: it would temporarily alleviate Rodriquez's pain and stiffness, while shortening his recovery time, so that he'll be playing for the Yankees in about six to nine weeks. The procedure will remove some of the impingement, the doctor said.

The Yankees slugger will require a second surgery after the season to fully repair the labrum. Recovery will take four months, but he is expected to be ready for action at the beginning of the 2010 season, the organization reported.