AirStrip to Market OB/GYN Software on the iPhone and Blackberry 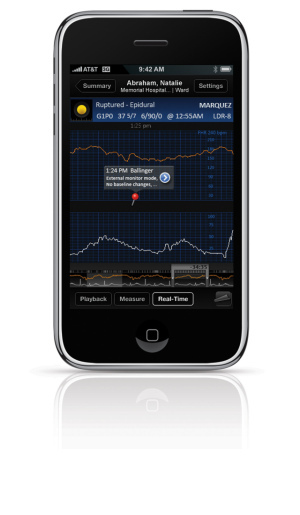 "The software allows obstetricians to use their phones to remotely access virtual, real-time and historical waveform data on their handheld mobile devices, even when they can't be bedside," Lato says. "Data such as fetal heart rate and maternal contraction patterns as well as notes and exam results can be viewed," he says.

In order for doctors to use the application, a hospital must first buy the AirStrip system, which works with the hospital's existing patient-monitoring system. Each hospital pays for the cost of the subscription service according to the number of doctors using it, so the price of the software varies, Lato says.

AirStrip president and chief medical officer, Cameron Powell, M.D., says that "labor and delivery is one of the riskiest and most litigious environments in healthcare," noting that AirStrip OB aims to lower this risk by providing gynecologists with up-to-date information on their patients.

"The adoption rate among doctors is going to be huge simply because of the patient safety factor," Dr. Powell says. Lato adds that the software is already being used in more than 50 hospitals.