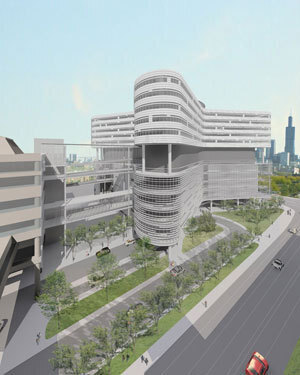 Frances Gulotta, who recently celebrated her 60th birthday, requested to have a daVinci hysterectomy at Rush after discovering she had both breast and endometrial cancer. Gulotta was to begin radiation on her breast after having surgery to remove the tumor, but treatment was put on hold when she was diagnosed with a cancerous tumor in her uterus.

The daVinci Surgical System enables the performance of complex surgeries through tiny incisions. The surgeon sits in an ergonomic console just a few feet from the patient and views the surgical site through a high-definition, three-dimensional camera. The three-dimensional camera and robotic arms are inserted into the patient though five small incisions. The surgeon uses hand controls and foot pedals to manipulate the arms in the robotically-assisted surgery.

According to Maurice, robotic surgery is more precise than traditional open surgery because the advanced technology allows the surgeon's hand movements to be scaled, filtered and translated into precise movements within the patient. The surgeon has greater dexterity, as the ends of the daVinci tools articulate 360-degree offering complete range of movement.

"I have 3-D vision that you can't duplicate with conventional surgery. I'm right up next to what I'm operating on," said Maurice. "It brings surgery to a whole different level."

Gulotta remained in the hospital for two days after her daVinci hysterectomy. "It was a neat experience," she said. "Women are stunned by my five little scars from the incisions. It's like they super glued me shut and there was hardly any bleeding."

Rush is a center of excellence for daVinci hysterectomies, as there are few hospitals nationally offering the service. "We've replaced a procedure that required a long recuperative period with one that allows patients to get back up on their feet much quicker," said Maurice.

Gulotta is now cancer free and gives many thanks to the Rush physicians and surgeons for their expertise. "I'm on cloud nine," she said. "When I talk to women, they say 'Why don't they tell us we can have our hysterectomy this way?'" The daVinci really is the way to go as far as I'm concerned."

Maurice is on the clinical team of the Program for Abdominal and Pelvic Health (PAPH) at Rush University Medical Center. The PAPH provides a multispecialty comprehensive approach to diagnosing and treating a wide range of abdominal and pelvic conditions in women and men of all ages. For more information, visit www.rush.edu