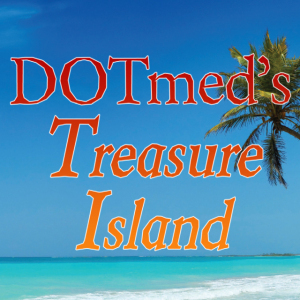 DOTmed, the Jewel
of the Internet
The opening night festivities of the Spring 2009 Health Connect Partners Radiology & Imaging Conference held in Miami from May 6-8 gave vendors and Directors of Radiology an opportunity to network, socialize and party. A number of Conference sponsors, including DOTmed, hosted Hospitality Suites at the riverfront Hyatt Regency. 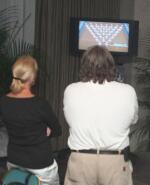 Our party theme was "DOTmed's Treasure Island -- The Jewel of the Internet." For entertainment we had two Wii gaming systems, as well as an open bar, and reggae music. Everyone was invited to go "Bowling for Bling!" on the Wiis, and high scores were awarded with Starbucks Gift Cards. Art Schnitzer, Director of Radiology at the Sacred Heart Hospital on the Emerald Coast, had the highest score of 581.

As part of the Treasure Island fun, we mailed over 100 keys to the invited Directors of Radiology, three of which would open the Treasure Chest lock. We passed out an additional 60 keys before the party, which also had a winning key in the mix. 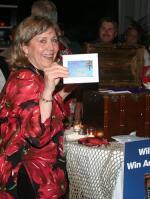 Of the 200 guests that showed up to our bash and tried their hand at opening the Treasure Chest, we had two lucky winners: 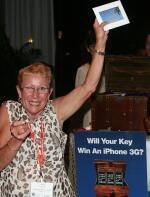 Lynne holds up her prize 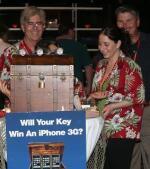 Congratulations to the two lovely ladies who won iPhones -- we'll be expecting a call from them on their new gadgets!