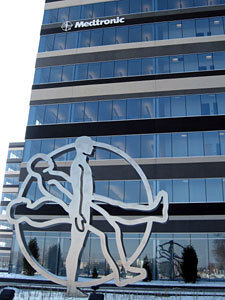 Medtronic has already
laid off about
400 U.S. employees
Fridley-based Medtronic in Minnesota may eliminate about 600 positions as part of its broader restructuring program.

Medtronic said that the job cuts are necessary to streamline operations and cut back in areas of the company that aren't living up to expectations. In all, Medtronic is expecting to eliminate 1,500 to 1,800 positions across its global operation through this spring and summer.

Medtronic has already laid off about 400 U.S. employees -- some in Minnesota. A number opted for early retirement or voluntary separation agreements and will complete their employment with the company by May 29. According to spokesman Chuck Grothaus, another 1,200 workers in the U.S. will also face the prospect of involuntary separation agreements, but it was unclear how many of the 600 local Minnesota workers would be losing jobs through layoffs rather than voluntary agreements. Medtronic chief executive Bill Hawkins indicated that a good portion of the job loss in Minnesota will be from early retirement or voluntary separations.

Minnesota has had as many as 8,000 Medtronic employees. It is the company's largest division, which makes pacemakers and heart defibrillators, as well as corporate headquarters, neuromodulation products and heart surgery products operation.

Seven hundred new jobs will be added in sales and research and development during Medtronic's current fiscal year, so Hawkins could not say exactly what the the company's headcount will be when restructuring efforts are completed.