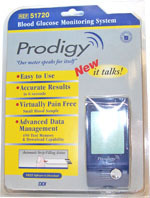 The maker of the Prodigy Meter
is moving operations on shore
from China and Taiwan
Diagnostic Devices Inc. will move much of its manufacturing business to North Carolina -- adding about 100 jobs in the next two years.

Diagnostic Devices Inc. has 44,600 square feet of manufacturing and distribution space in CrossPoint Center and a separate headquarters location in the Harris Corners business park in Charlotte, N.C. The company employs 50 individuals from the area and hopes to purchase a 50,000-square-foot facility soon according to chief operating officer Richard Admani Abulhaj. The company is owned by Abulhaj and his brother Ramzi.

The brothers also own SensoTronics, a sister operation that manufactures Diagnostic Devices' diabetes testing products (the company's signature product, Prodigy Meter, and diabetes-testing strips among them). The new facility with be SenoTronics home. It will allow Diagnostic Devices to move half of its production of the Prodigy Meter from China and Taiwan to the United States. "With that change, 80% of all the company's product will be made in the U.S.," says Abulhaj.

Abulhaj said while many companies are now moving their manufacturing operations overseas, we are doing the opposite. "We'd rather be creating jobs here instead of in China," he said.

Abulhaj went on to say that the high-tech manufacturing processes will enable the company to produce products at a lower cost with a smaller labor force (even though for North Carolina it means the potential for 100 jobs over the next two years). He said locally manufacturing the devices will also cut back on shipping expenses and improve quality control.

The company's Prodigy Meter continues to grow in popularity because it gives its readings aloud, making it easier for the visually impaired - a common problem among diabetics - and children to get test results. The American Foundation for the Blind has recognized the company's device with the organization's Access Award. That award honors companies for their efforts to reduce inequities for the blind or visually impaired.

Future product development will focus on chronic diseases such as respiratory conditions.