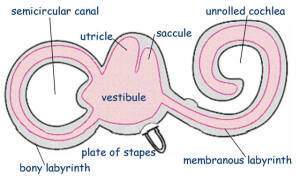 Inner ear problems contribute
to falls in seniors
A full third of American adults, 69 million men and women over age 40, are up to 12 times more likely to have a serious fall than others, because they have an inner-ear dysfunction that throws them off balance and makes them dizzy, according to Johns Hopkins experts.

Among the other key findings of this three-year survey are that a third of this group, or more than 22 million people, were unaware of their vulnerability, having had no previous incidents of disequilibrium or sudden falls to suggest that anything was wrong.

In the survey, published in the Archives of Internal Medicine online, these asymptomatic people were three times more likely to suffer a potentially fatal fall than people with a healthy sense of balance, whereas people already experiencing symptoms of imbalance had a 12-fold increase in risk.

Among the elderly, accidental falls are among the leading causes of death, the authors note, killing an estimated 13,000 seniors each year in the United States and resulting in more than one and a half million visits to hospital emergency rooms, experts say.

Falls among the elderly are common knowledge. But before now, researchers didn't realize that younger people suffer inner ear imbalances that result in serious fall, too.

"Vestibular imbalances need to be taken seriously because falls can be fatal and injuries can be painful, lead to long hospital stays and result in significant loss in quality of life," says Lloyd B. Minor, M.D., the Andelot Professor and director of otolaryngology - head and neck surgery at the Johns Hopkins University School of Medicine.

More than 5,000 men and women over age 40 participated in the survey, which took three years to complete and involved specialized exams and balance testing to find out who had vestibular dysfunction, its early signs and symptoms, and who did not.

And the chance of having a balance problem, survey results showed, increases with age and diabetes. Eighty-five percent of men and women over age 80 had an imbalance problem, 23 times more than people in their 40's.

Moreover, people with diabetes were 70 percent more likely to suffer from vestibular problems. Researchers say this is likely due to damage done by high blood sugar levels to the hair cells in the inner ear that modulate balance control; and to the long-term damage from diabetes to the inner ear's small blood vessels.

"Our survey shows that balance testing needs to be part of basic primary care, and that all physicians need to be monitoring and screening their patients for vestibular dysfunction so that we can take preventive measures to guard against falling," says Minor.

Lead study investigator Yuri Agrawal, M.D., says one reason for the large numbers of undiagnosed and untreated individuals is that balance testing requires specialized training and the tests take more time and effort to perform than other diagnostic or screening procedures.

As part of the new survey, study participants were subjected to a half dozen key tests of unsteadiness, including physical exams.

Balance function was assessed by subjects' ability to stand upright with and without visual cues, such as being able to stand upright while wearing a blindfold or with their eyes closed, or by not having to use their arms to maintain balance while standing on a foam-padded mat.

"Now that we have identified the magnitude of balance problems, primary care physicians are more likely to be on the look out for its early signs and symptoms, and more attuned to when a patient needs to be referred to a physical therapist," Agrawal says.