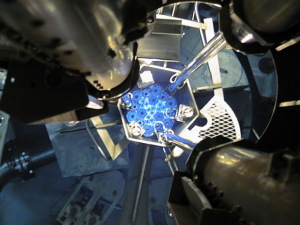 MAPLE 1 reactor
at 500ks power,
Feb. 2001
Image courtesy of
MDS Nordion
The shortage of medical isotopes will be a crucial issue for experts convening at the Society of Nuclear Medicine (SNM) meeting in Toronto, beginning this weekend.

Supplies of the radiopharmaceuticals have been scant since Atomic Energy of Canada Ltd (AECL), closed down its 52-year-old reactor at Chalk River, Ontario in May, after a leak was found in the reactor's vessel. The plant produces about 40 percent of global molybdenum-99 supply.

The reactor is the only one in North America, and one of five in the world, that makes molybdenum-99, which decays to become technetium-99m, an isotope used in an increasing number of medical tests.

Meanwhile, the AECL is frustrating suppliers and physicians alike, by being so vague about when--or if--the 52-year old plant will be restarted. AECL says it could take three months or more to restart the Canadian reactor and restarting it will depend on whether inspectors believe the half-century old facility is still viable.

To make matters worse, the only other large MO99 plant, in The Netherlands, is scheduled to be shut down for maintenance in mid-July to mid-August. This plant's output is about equal to Chalk River's.

Michael Graham, PhD, SNM's President-elect and director of nuclear medicine at the University of Iowa, says that having the two world class plants down at once "will cause widespread ramifications for the medical community. The bottom line is that patients needing nuclear medicine tests may not get them, and may even have to undergo exploratory surgery in some cases," Dr. Graham says.

He notes radioisotopes are used for such tests as: looking at blood flow in the heart; for bone scans, and for all sorts of other studies, like lung scans and uptake of excretion in the kidneys.

Meanwhile, Christopher O'Brien, M.D., president of the Ontario Association of Nuclear Medicine, worries that Canada's Atomic Energy Control Board will not restart the plant. "They say it will take at least three months but they haven't promised anything," he says. "And no one knows what's going on because they're so hush-hush."

Nordion and The Maples Plants

AECL's actions have deeply affected MDS Nordion, which has an exclusive agreement with the AECL to distribute the plant's uranium. The company is frustrated, both by the fact that AECL is not providing a timetable for the current shutdown, but also because the agency has indefinitely idled two new plants Nordion built, called the Maples plants.

The Maples are twin plants--one is a backup facility--and are the only plants to date that are dedicated to making medical isotopes, says Jill Chitra, MDS Nordion's vice president of Strategic Technologies.
1(current)
2
3