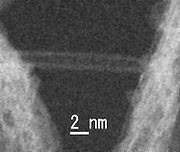 Electron micrograph showing
an individual nanotube
By injecting man-made, microscopic tubes into tumors and heating them with a quick, 30-second zap of a laser, scientists have discovered a way to effectively kill kidney tumors in nearly 80 percent of mice. Researchers say the finding suggests a potentially exciting cancer treatment for human beings.

When dealing with cancer, survival is the endpoint that you are searching for," said Suzy Torti, Ph.D., lead investigator for the study and professor of biochemistry at Wake Forest University School of Medicine. "It's great if you can get the tumor to shrink, but the gold standard is to make the tumor shrink or disappear and not come back. It appears that we've found a way to do that."

Nanotubes are long, thin, sub-microscopic tubes made of carbon. For the study, researchers used multi-walled nanotubes (MWCNTs), which contain several nanotubes nested within each other, prepared for the study by the Center for Nanotechnology and Molecular Materials. The tubes, when non-invasively exposed to laser-generated near-infrared radiation, respond by vibrating, creating heat. If enough heat is conducted, tumor cells near the tubes begin to shrink and die.

Using a mouse model, researchers injected kidney tumors with different quantities of MWCNTs and exposed the area to a three-watt laser for 30 seconds.

Researchers found that the mice who received no treatment for their tumors died about 30 days into the study. Mice who received the nanotubes alone or laser treatment alone survived for a similar length of time. However, in the mice who received the MWCNTs followed by a 30-second laser treatment, researchers found that the higher the quantity of nanotubes injected, the longer the mice lived and the less tumor regrowth was seen. In fact, in the group that received the highest dose of MWCNTs, tumors completely disappeared in 80 percent of the mice. Many of those mice continued to live tumor-free through the completion of the study, which was about nine months.

"You can actually watch the tumors shrinking until, one day, they are gone," Torti said. "Not only did the mice survive, but they maintained their weight, didn't have any noticeable behavioral abnormalities and experienced no obvious problems with internal tissues. As far as we can tell, other than a transient burn on the skin that didn't seem to affect the animals and eventually went away, there were no real downsides -- that's very encouraging."

Torti told DOTmed News that gold nanoshells, single-walled nanotubes, and nanohorns are all being explored as potential cancer therapeutics. "We think we are the first to show improved long-term survival in tumor-bearing mice treated with multiwalled nanotubes," she says.
1(current)
2