Lightning Storms Cause Death Due to Cardiac and Respiratory Arrest 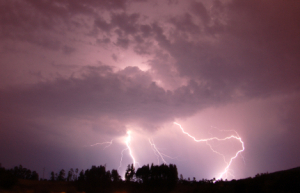 When a storm approaches,
take cover indoors
Summer is prime time for thunder and lightning storms, which can cause injury and more likely death, warns Shreni Zinzuwadia, M.D., an ER physician at UMDNJ-The University Hospital and instructor of Emergency Medicine at the UMDNJ-New Jersey Medical School.

She tells DOTmed News that lightning kills 200 people on average yearly in the U.S. One strike delivers more than 10 million volts of electricity. Being struck by lightning is fatal in about 30 percent of cases, Dr. Zinzuwadia says.

Recent lightning strikes in Newark have resulted in one death and injured three others. Respiratory or cardiac arrest are the leading causes of death.

There are four different types of lightning strikes, she says. The first is a direct strike, where a victim gets hit directly by lightning; a second type of strike is called a side flash where lightning jumps from the initial point of contact (for example, a tree) to the victim.

A third type of strike is the contact strike where an object that the victim is holding (say, a pair of eye glasses) is struck by lightning. The victim gets hit secondarily. The fourth type of strike, called step potential, "happens when a current traveling through the ground goes up your leg, travels through you and then goes down the other leg and back into the ground," Dr. Zinzuwadia says.

She says that a common Boy Scout practice is to stand on one leg during a storm. "They are trying to decrease their chances that the current will go through them by having only one foot on the ground," she explains.

She adds that many people who aren't directly hit may suffer from the "blunt force of being thrown some distance by the sheer force of the lightning." Some people might get superficial burns on their skin or their clothing may burst into flames or be torn away from their bodies.

Dr. Zinzuwadia warns that lightning is attracted to the tallest objects in the area and advises people to stay as far away as possible from these structures.

"For instance, lightning likes to find the tallest structure within a 30 to 60 yard radius," she tells DOTmed, comparing a mountain top half a mile away, a TV tower 300 yards away, or a tree 75 yards away.

She adds, "the least amount of your body should be touching the ground as possible to decrease the risk of getting hit. Keeping one foot off the ground, as the Boy Scouts do, may save your life."
1(current)
2