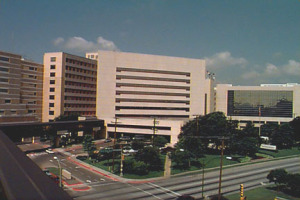 "Parkland is the rare exception -- the only AAA rated hospital in the country -- public or private. These ratings were due in large part to the credit strength of Dallas County and reinforced by Parkland's good operating performance, the support of the County Commissioners and especially the support of the Dallas County voters," said John Dragovits, Executive Vice President and Chief Financial Officer.

Both rating agencies cited the strength and diversity of the Dallas economy as well as the substantial tax base as a factor in Parkland's favorable standing. They also cited Parkland's lack of debt, positive operating margins, liquidity and cash flow. The agencies also recognized Parkland for its essential role in the health of the Dallas area with services such as a Level I trauma center and the sole burn unit.

The credit ratings are necessary as part of the issuance of $705 million general obligation bonds, approved by Dallas County voters in November 2008.

Parkland will offer $705 million in general obligation bonds. In an effort to attain more cost savings, Parkland officials plan to issue a majority of Build America Bonds, a federal program that provides a 35% subsidy to public entities.

"Our fiscal prudence brings real value to the taxpayers. We anticipate that this prime credit rating and the cost savings of the Build American Bonds together will save about $60 to $80 million," Dragovits said. "Together, these will help us achieve our goal for some of the lowest interest costs."

In November 2008, Dallas County voters approved by 82% a bond issue from which proceeds would be used for construction of a new hospital. The $1.27 billion project includes an 862-bed hospital, outpatient center, office center and parking. In order to reduce the burden on taxpayers, the financing plan includes not only $747 million of combination tax and revenue bonds, but also $350 million from Parkland's current and future cash reserves and $150 million in philanthropic dollars raised by the Parkland Foundation. Construction is planned to begin in early 2011.