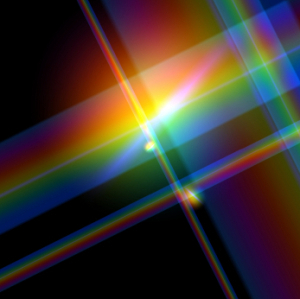 Experimental use of light
may illuminate understanding
of cancer activity
Using a new technique, cancer researchers can shine non-toxic light on one part of a cell, turning a protein on in a target area to study why the same protein that normally protects people from cancer suddenly turns traitor and stimulates a tumor's growth and metastasis.

The technology is the brainchild of Klaus Hahn, a professor of pharmacology at the University of North Carolina at Chapel Hill School of Medicine, and is currently being tested in sub-clinical trials.

"Until now, researchers trying to understand how proteins operate to stimulate tumors have not been able to activate most proteins with precise timing and localization," Hahn tells DOTmed News.

He says prior methods involved isolating a protein and attaching markers to it, to make the protein light sensitive, and then re-introducing it into tissue, which in many cases is impossible to do in the animal trials now taking place.

"For instance animals, like people, are quite delicate and it's hard to re-inject all the cells taken from their livers," he says.

Hahn's way of perusing proteins involves genetically engineering them to make them light sensitive at wavelengths of between 450 to 500 nanometers, much less toxic than the UV lighting now used.

Looking at proteins' often ornery behavior is instrumental in studying cancer and metastasis because the very same proteins appear to do opposite things, Hahn says. For instance, a normal protein might be involved in apoptosis--a process in which cancer cells are said to commit suicide.

(Biologics on the market like Velcade for multiple myeloma spur apoptosis. And cancer researchers say that the red-wine ingredient, resveratrol, has been shown to induce apoptosis in mice with tumors, when given in high doses.)

"But when someone has cancer, the same protein that in healthy people protects cellular function--by way of apoptosis and other immune defenses--suddenly causes tumors to develop and metastasize," Hahn says. "The reason for this is that the protein is turning on in the wrong places or at the wrong times in the cell."

He says he doesn't yet know when his technique will enter human trials.

Hahn says his technology would also be valuable in identifying new drugs, by turning on signaling pathways at particular times for more specific drug screening.

Hahn says he is currently looking for a drug company to help him develop this biotech and assay technology.