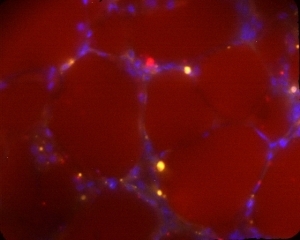 Fat cells protect leukemia
cells from chemotherapy
Obese children with leukemia have higher rates of chemotherapy resistance and higher relapse rates than thinner kids, according to recent findings published online in Cancer Research, a journal of the American Association for Cancer Research.

Dr. Mittelman, M.D., Ph.D., is the fellowship research director with the Division of Endocrinology at Children's Hospital Los Angeles, and assistant professor of pediatrics, physiology and biophysics at the Keck School of Medicine, University of Southern California

He says his work was inspired by a study conducted by a colleague, Anna Butturini, M.D., associate professor of clinical pediatrics in the Division of Hematology-Oncology at Children's Hospital, which showed that obese children diagnosed with leukemia have a 50 percent higher chance of relapsing compared with lean children.

He tells DOTmed that when he saw Dr. Butturini's presentation, he wondered what mechanisms might cause this phenomenon, whether, for instance, the worse prognosis for obese children might be due to higher insulin levels or other factors.

"Lo and behold, we found fat cells protect leukemia cells from a myriad different chemotherapies," Dr. Middleman says. "Now we have to figure out how this two-way interaction between fat cells and cancer cells works and develop ways to block it." He says, "it's important that oncologists think about outcomes for their obese patients."

Dr. Mittelman and colleagues used obese mice to look into why obese children were more at risk of relapse of leukemia. They cultured fat and leukemia cells together, and treated the leukemia cells with traditional chemotherapy drugs used in children--Vincristine, Nilotinib, Daunorubicin and Dexamethasone.

Researchers discovered that obese mice with leukemia had higher relapse rates than lean mice after treatment with the first-line chemotherapeutic agent Vincristine. The chemotherapy treatments all worked less effectively in culture when fat cells were nearby. When the mice relapsed from the leukemia, the researchers found leukemia "hiding out" in the fat tissue during chemotherapy.

"These four drugs attack leukemia cells by different routes, so when we saw fat cells blocking them we realized there could be an important mechanism promoting their ability to live and divide," Dr. Mittelman says. "We were surprised to find leukemia cells in the fat tissue."

Commenting on the trial, David Hockenbery, M.D., member of the Fred Hutchinson Cancer Research Center and professor of internal medicine at the University of Washington, said "this study provides striking experimental support for the clinical observations that obesity is associated with poor prognosis in multiple cancers."

The researchers demonstrated that co-culture of leukemia cells with adipocytes diminishes response to multiple chemotherapeutic agents. Therefore, adipose tissue may function as "a safe haven" for leukemia cells during therapy, Dr. Hockenbery says. He advises that careful attention be paid to dose adjustments for obese patients undergoing chemotherapy.

Leukemia is the most common cancer in children, affecting more than 2,000 children each year in the U.S.