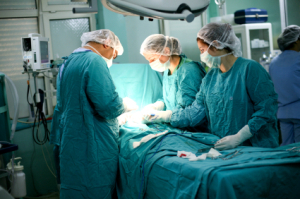 IORT is performed in
the surgical suite
immediately after
tumor removal
Radiation oncologists at Cancer Treatment Centers of America® are adopting single-dose intraoperative radiation therapy (IORT) for use in patients with early-stage breast cancer.

IORT is performed in the surgical suite immediately after tumor removal. Once the surrounding healthy organs and tissues are shielded, IORT uses a mobile linear accelerator to deliver a full dose of radiation directly to the tumor site.

The entire procedure from lumpectomy or mastectomy to radiation and breast reconstruction takes place in a single surgical visit, eliminating the multi-week course of external radiation that accompanies standard breast cancer treatments.

While advances in implantable breast brachytherapy have reduced the course of post-op radiation to as few as five days, the use of IORT for breast cancer represents a milestone in the treatment of the disease.

According to CTCA's Director of Radiation Oncology, Pablo Lavagnini, M.D., "Because you have moved all the sensitive tissues out of the way and/or you have shielded them, there is less radiation to normal tissues." Breast reconstruction can be done immediately after the radiation is applied. "The surgery leaves a better cosmetic result when you compare that to the typical lumpectomy with radiation, whether it is whole breast or whether it is partial breast radiation with brachytherapy. That's an additional benefit of the technique."

In combination with other treatment modalities, IORT has been commonly used to treat rectal, pancreatic, gynecological and other cancers for decades; however, the specific use of the technology to treat breast cancer has gained prominence in Europe in recent years.

"Not only is the IORT being used for localized breast surgery on patients amenable to lumpectomy and radiation, but it's also being used for women with bilateral breast cancer," Lavagnini points out, noting that in Italy IORT has been used on patients who were not candidates for partial mastectomy and/or partial breast radiation, citing the success of subcutaneous nipple sparing whole mastectomy with intraoperative radiotherapy and immediate reconstruction.

"In nipple-sparing subcutaneous mastectomy, the surgeon performs the resection of the breast parenchyma, preserving all the skin, including the nipple-areola complex, he explains. "A small amount of glandular breast tissue needs to be preserved so that the capillaries and the vascularity of that area are not lost, otherwise there would be necrosis and sloughing in that area. That is the area where there would be a recurrence in these patients, so that's the only thing that gets irradiated intraoperatively at the time of the subcutaneous nipple-sparing mastectomy."

After the radiation dose, a permanent prosthesis can be placed, and surgery is finished. "The patient doesn't have to have a mastectomy that is extremely physically and psychologically mutilating. She doesn't need to get chest wall radiation and when she wakes up she still has her breast."

While not all women with breast cancer will be candidates for IORT, many women with the disease may benefit.

CTCA will use FDA-approved Novac7 technology from Italian device manufacturer Hitesys S.p.A, which developed the accelerator technology for operating room use. CTCA will offer the treatment option at its Philadelphia facility beginning in February 2010.